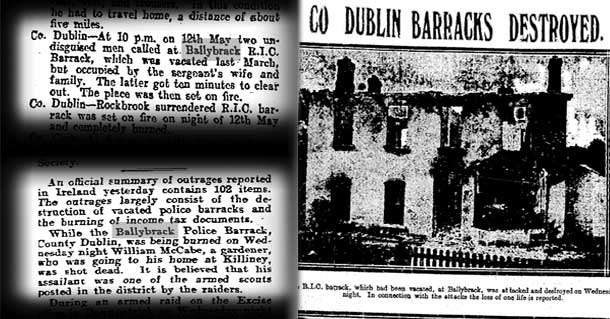 ON MAY 12th 1920, dozens of Irish republican prisoners were entering their 20th day of hunger strike in Wormwood Scrubs in England. At the same time there were numerous reports in the British media that ‘special forces’ were about to be sent to Ireland to deal with the intensifying IRA campaign against Britain’s continuing brutal occupation of Ireland – this was despite the fact that an overwhelming majority of Irish people had voted in favour of Irish independence in 1918.

It was against this backdrop that Volunteers of the 6th Battalion of the Irish Republican Army, based in south County Dublin, were sent out to destroy British bases in the area. Their objective was simple – destroy all Royal Irish Constabulary (RIC) and Dublin Metropolitan Police (DMP) barracks with the aim of preventing them being used to house Britain’s so-called ‘special forces’, the notorious Black and Tans. These attacks in the Dún Laoghaire area were but a few of hundreds of co-ordinated attacks that took place across the entire country on the same day with the same aim. In all, 70 barracks buildings and British Government offices were destroyed.

Volunteers Patrick Meaney (originally from County Carlow) and Thomas Dunne (from west Wicklow) joined with their comrades from the 6th Battalion and initiated attacks on Kill o’the Grange DMP barracks and Ballybrack RIC barracks. At about 10pm, checkpoints were set up on all approach roads to both barracks, telegraph wires were cut and commuters coming off trains in Killiney were detained for the period of the attacks. Reports of the day say “a cordon of scouts was thrown across the whole district, extending from Killiney village in a circle to Loughlinstown and thence to Ballybrack”. The reports went on to say the Volunteers “carried revolvers and while many of them wore masks others were not disguised”.

It is estimated that up to 50 IRA Volunteers were involved in the operation to destroy Ballybrack RIC barracks. A similar operation was undertaken at Kill o’the Grange at the same time. The wife of the RIC sergeant who occupied the Ballybrack building was the only person present at the time. She was told to leave the building and allowed time to collect her personal belongings. Volunteers then proceeded to place hay and straw, which they had gathered locally and saturated with petrol commandeered from Edwards’ grocers in Ballybrack village, in various rooms in the barracks and set it alight.

The head gardener to ‘the Right Honourable’ Laurence Waldron PC was killed at an IRA checkpoint when it’s thought he failed to answer a challenge and was shot to prevent the operation being compromised.

It is at this point that things become less clear. It appears that while the barracks was being burned, two Volunteers were seriously injured. Newspaper stories report two injured men being admitted to the Mater Hospital with severe burns after arriving in the city centre as passengers on motorbike and sidecar. The driver of the motorbike said he had been held up at gunpoint in the ‘Kingstown district’ and ordered to take the men to hospital in the city centre. Reports from Ballybrack described how a resident saw a masked man hold up a motorcyclist with a trailer near the barracks and direct him to take him to an undisclosed location.

Patrick Meaney and Thomas Dunne were admitted to the Mater Hospital and died there within days of the attack – Dunne on May 14th and Meaney on May 21st. Both were acknowledged as Volunteers of the Irish Republican Army and are honoured as such by republicans today.

A short ceremony of remembrance will be held at the memorial in honour of the two IRA Volunteers on June 2nd at 7pm.

All are welcome to attend.