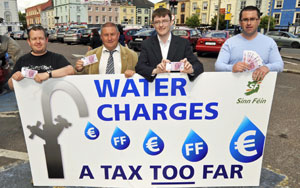 Sinn Fein City and County Councillors David Cullinane, Brendan Mansfield and Pat Fitzgerald this week launched a local campaign of opposition to the introduction of domestic water charges. The councillors dismissed Government claims that any new charging mechanism is about water conservation.
“This is a new tax-raising initiative being introduced by the Government,” Cullinane said. “Households already pay for these services through the general taxation system. The pretext for the introduction of water charges is water conservation.  To conserve water the first thing that needs to be done is the upgrading of our water infrastructure to deal the fact that almost 40% of treated water is wasted through leaks.”
Cullinane pointed out that installing meters to facilitate the introduction of water charges will cost in the region of €600 million. To cover this cost householders will be charged sums varying from €200 to €580 depending on the location of the dwelling and other factors. “Investing in upgrading the water treatment and delivery systems would be more cost effective than installing meters,” he said. “The Government should introduce grants to allow households introduce water-saving technologies in their homes at affordable prices. This will also create jobs in the green technology area. All new housing builds should also be subject to robust planning guidelines which include high standard water-saving technology. The fact of the matter is that you can achieve water conservation without water charges.”