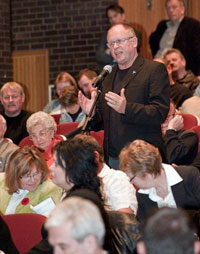 A campaign has been launched in Canada to win support for an Irish Unity Pledge, following a conference there last November, which was attended by Gerry Adams. Last November, Friends of Sinn Fein (Canada) Inc. presented a Forum in Toronto entitled “A United Ireland:  How Do we Get There?” The object of the conference was to generate discussion around how Canadians could help win Irish unity.  Speakers at the conference included Gerry Adams M.P., Charlie Angus M.P. (NDP), former Canadian Solicitor General Warren Allmand, former Saskatchewan Attorney General, Chris Axworthy, and Montreal trade union leader Manon Peron of the Conference of National Trade Unions.  Representatives of Irish Canadian groups from across Canada, including the G.A.A, also addressed the audience, which numbered over 300 people.
At the end of the conference, the Pledge campaign was launched. The campaign aims to win public commitment in support of Irish unity from prominent Canadian politicians, trade unionists, academics, artists, athletes, and Irish community groups and leaders.  The wording of the Pledge is set out below.  The campaign is sponsored by various groups and individuals across Canada, including the Quebec Ireland Committee, the Emerald Isle Social Club, the Toronto Teachers for Irish Unity, the Durham Committee for the Irish Unity Pledge, the Ottawa Group for Irish Unity, and FOSF.
In the first six months of the campaign, the Pledge has won support from federal, provincial and municipal politicians, including Pat Martin MP, Charlie Angus MP, and former Quebec Premier Bernard Landry.  From the world of Labour, support has come from the President of the Ontario Federation of Labour Sid Ryan, the Montreal Council of the Confederation of National Trade Unions and the St. Catherines and District Labour Council, amongst others.  Also signing on board has been Canada’s boxing legend George Chuvalo and Kevin Tierney, the Producer of “Bon Cop, Bad Cop”, one of the highest grossing Canadian films of all time domestically.  The Irish Canadian community has been quick to provide its backing.  Support has come from groups such as the Barrie Irish Club, the G.A.A., the Brampton Irish Centre and the Charitable Irish Society in Halifax; along with individuals such as the National President and Vice-President of the Ancient Order of Hibernians.
A full list of the Pledge signatories can be found at the website www.irishunitypledge.com.  The campaign also has a Facebook Page with almost 800 fans.

THE PLEDGE
WHEREAS, Irish reunification would address the root causes of conflict in Ireland and establish the basis for a permanent peace settlement;
AND WHEREAS, the Good Friday Agreement created a political framework in which Irish reunification can occur;
AND WHEREAS the Good Friday Agreement has already facilitated the establishment of all-Ireland governing institutions;
WE THE UNDERSIGNED pledge our support for the peaceful and democratic reunification of Ireland.