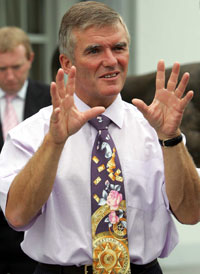 Fianna Fáil Senator Ivor Callely is at the centre of an expenses storm after it emerged that the Dublin-based TD had claimed over €80,000 in subsistence and travel expenses from his property in west Cork. On Wednesday, he insisted that he fully complied with the regulations concerning his expense claims. Fianna Fáil leader and Taoiseach Brian Cowen is now coming under increased pressure to take action against Callely.
In a personal statement to the Seanad, the Senator said he very much regretted any “distraction” brought to the House and to its members by the coverage of his expenses. He said he was requesting the opportunity to go before the Select Committee on Members Interests in order to produce all documents and explain his position.
He repeatedly said that the expenses system was ‘complex’.
On 8 December 2005, Callely resigned a cabinet post after RTÉ reported that a building contractor involved in public contracts had painted his house for free in the early 1990s. A number of other corruption allegations have been made against hims since. He lost the subsequent general election but Bertie Ahern appointed him to the Senate.
An Phoblacht
44 Parnell Sq.
Dublin 1
Ireland