Finucane detective was warned off 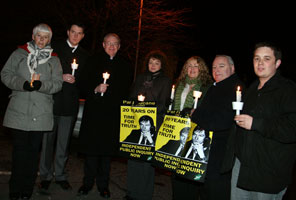 A new book by a former member of the RUC acknowledges collusion in the assassination of Belfast solicitor Pat Finucane.
An RUC detective tasked with investigating the killing in 1989 was visited and warned by a senior RUC officer not to “get too deeply involved”.
Detective Alan Simpson headed a team of RUC detectives investigating the Finucane killing. In an account of his life in the RUC due to be published this week, Simpson reveals that, less than 24 hours after the murder of Pat Finucane, he received an unusual visit from the head of the CID.
Simpson was informed by a telephone call from RUC HQ that Assistant Chief Constable Wilfred Monaghan would be visiting the Antrim Road incident room where the investigation was being co-ordinated.
In his account, Simpson recalls that such an occurrence was so unusual that he regarded it as “a minor state visit”. As Simpson was walking the Assistant Chief Constable back to his car, Monaghan issued a warning. “If I were you,” he said, “I wouldn’t get too deeply involved in this one”.
It was only later that the investigating officer understood the significance of these words. “As events developed over the following months and years, with strong suspicions that members of the security services had colluded with terrorists, that the Acc’s words took on a more sinister meaning,” recalls Simpson.
Later it was revealed that RUC Special Branch and the British Army’s Force Research Unit had colluded in the killing. Special Branch failed to inform the investigating team that a number of agents were involved in the murder of Pat Finucane.
Responding to these latest revelations, Sinn Féin Assembly member for North Belfast Gerry Kelly said:  “The cover up of the involvement of British military intelligence and Special Branch in Pat Finucane’s murder has been going on since 1988. Despite this very deliberate policy of concealment the Finucane family have remained steadfast in their demands for the truth. The Finucane case will not go away. Only a fully independent, judicial inquiry into this killing will uncover the truth.
“These revelations will not surprise those of us who have supported the family in their campaign.
“The involvement of British military intelligence and the Special Branch in Pat Finucane’s death, their manipulation of the loyalist death squads and the political authorisation of these activities, must be properly investigated and exposed.”