Ireland: A Land of a thousand welcomes? 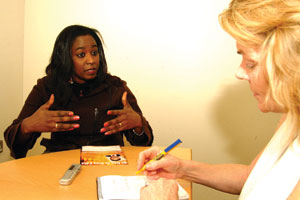 SALOME MBUGUA, from Kenya, is the director of AkiDwA, (the African Women’s Network Ireland), an organisation committed to empowering African women living in Ireland.  The organisation recently launched a report calling on the Government to address health and safety issues facing women asylum seekers in state care. The report is entitled Am Only Saying it Now: Experiences of Women Seeking Asylum in Ireland.
This report, written and compiled by Salome, examines the difficulties confronting women who are in ‘direct provision’ state care while awaiting decisions on their asylum applications. The majority of these centres are run on behalf of the state by private companies.
“The report was designed to document the experiences of women living in the centres”, Salome tells me. “These centres emerged from a system introduced by the government in 2000.”  Women living in direct provision can be vulnerable, isolated and excluded from mainstream society.  “The centres provide very confined conditions, not suitable for raising children in. The women are put into accommodation and provided with food but one of the problems is that these centres don’t address the individual problems of the women – for instance women who have been trafficked into the country. Women are often put into more vulnerable situations and this is particularly worrying in the case of those who have been through various forms of violence or who might have been raped before coming here. These can be women from countries like Sudan, Uganda and other third world countries.”
The report is very largely in the voices of the women themselves and some of their comments make disturbing reading. Many of the women contributors to the report said that they ‘felt vulnerable’.  In the first place the direct provision centres allow little privacy. “The management hold the keys of the premises”, Salome says. “One woman told me she was having a shower when a member of the management walked in. She was already naked in the shower – what could she do? The women don’t have the keys themselves.”
In some centres poor living conditions were mentioned, including ‘limited heating, overcrowded communal living quarters, unhygienic and insecure communal bathrooms, and isolated laundry facilities.’  One woman participant compared the facilities to those of a prison. “Living in a reception centre is really depressing regarding all aspects. You don’t have your own life. You can’t eat what you like to eat. It’s really frustrating living in this condition because you don’t have freedom. It’s like being in jail. At least as a prisoner you know when you are getting out – not when you are an asylum seeker.’
I put this disturbing comment to Salome. “Yes, I’ll give you an example,” she says. “Women have to sign in and out of all the centres. You can’t decide how you want to spend your day like anybody else. We are also looking at issues of poverty because, don’t forget, they are only living on €19.10 per week. You must remember that these women don’t get child benefit like Irish mothers. They only get €9.60 per child for a week.  If they need to travel for medical treatment or to see a lawyer they have to pay for the transport themselves. It’s very stressful. Also there’s food poverty. They women are not getting the nutrition they need either for themselves or for their children. The centres don’t take into account if you have an allergy or specific nutritional needs.”
Another participant in the report points to the additional risks that come with the overall pressure put on the family unit. ‘Sometimes men are affected more ... they are frustrated that they can’t provide for their families. They sometimes put this frustration out on their partners, so women end up getting double abuse, frustrations and pressure.’ These women want to work, Salome points out. “They want to be allowed to work during the years they are waiting for an outcome on their asylum applications but they are not allowed to. We are calling for a meeting with people working in the sector, particularly with the Department of Justice, Equality and Law Reform, to discuss our recommendations.”
There are over 6,000 asylum seekers in Ireland and very many of them are women and girls. These centres were established with a view to holding people for six months, but there are women who have been there for six or seven years.
In December 2007 I interviewed Salome, on behalf of An Phoblacht, regarding the issue of racism in Ireland. I ask her if any of that has changed since then. “I don’t think things have really changed in relation to racism, it’s just that people aren’t talking about it. They don’t really want to look into the problem. The National Consultative Committee on Racism and Interculturalism (NCCRI) has been scrapped.” Funding for that organisation was withdrawn in December 2008.  “People make assumptions about asylum seekers”, Salome says, “they don’t look at the reasons why people are seeking asylum, so the women we represent find it very hard to engage with the broad community. “
Since 1 January 2005, children born in Ireland no longer have as an automatic right to Irish citizenship if they are born here. This was in the aftermath of constitutional changes made during the Citizenship Referendum of 2004. In most cases their countries of origin will be unknown and foreign to these children, as they won’t have spent much, if any, time there. As the report points out, these children are often left without a sense of identity or place. The sense of alienation born out of that dislocation is often compounded by the ongoing threat of racism.

TOYOSI SHITTABEY
The killing of 15-year-old Toyosi Shittabey on Good Friday, as he was walking home with four friends, brings that factor home in a troubling way. Two male adults have been charged in relation to the fatal stabbing in the west Dublin suburb of Tyrrelstown.
The killing appears to substantiate what Salome is saying about racism in this country. “We spoke before about racism in Ireland,” she says.  “We need to create awareness around the racism in Ireland and get some commitment from government and the Irish people to address it. I felt so hurt by the way 15-year-old Toyosi Shittabey died and so moved by the outpouring of grief from the young people who were with him when he died. And still the racism continues.”