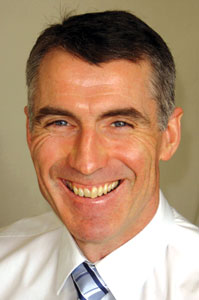 In his address at the Lurgan Easter commemoration, Sinn Féin national chairperson Declan Kearney said that, as a result of the republican struggle, Irish unity is now inevitable, and he also had a strong message for militarist factions on the fringes of republicanism.
“The Peace Process has changed the future of the entire island,” he said. “It has thrown up new dynamics, potential, and opportunities for progress.
“There has never been a better opportunity since 1916 to successfully bring about national and democratic objectives.
“Sinn Féin’s role in negotiations since 1998 has created a whole new momentum.
“The Good Friday, St Andrew’s, and Hillsborough Caste Agreements represent a continuum of political change.  They cannot be changed, air brushed, or reversed.
“Everything has changed. The “B Men”, RUC, UDR are all gone.  Unionist one party rule is finished.
“These generations of nationalists don’t do 2nd class citizenship.  We won’t be sitting at the back of the bus anymore. We’re in the driver’s seat now, and this is a non stop journey to Irish independence.
“Our strategy sign posts a road map to Irish unity.  And that’s where some on the edges of republicanism and nationalism get it so wrong.
“The IRA fought the war to a conclusion.  There is no other IRA... in Lurgan, Craigavon, Portadown, or anywhere else.  And there’s no armed campaign to be finished.
“The IRA’s Volunteers today are involved in political and democratic programmes to achieve Irish unity, because that’s what works.
“The actions of militarist factions are totally counter productive.
“IRA Volunteers fought the armed struggle to remove British soldiers from the North.  Today the actions of these groups are designed to bring them back.
“These groups contain individuals pursuing different agendas.  Some are working directly in concert with M15, and other anti-peace process agencies within the British state.  Others are involved in undisguised criminality.
“But they also include some who are motivated by patriotism.  And, we need to reach out and engage with them.
“Those who politically oppose republican strategy and the Peace Process are entitled to do so.  But that doesn’t mean they are right; and they are absolutely wrong to use militarism to advance their position.
“The best place to organise for republican objectives is in Sinn Féin.  Make no mistake about it; Sinn Féin is the only united Ireland show in town.
“The Hillsborough Castle Agreement is the product of a republican strategy that works.
“It demonstrates how we will achieve a united Ireland... through political strength, political momentum, determination, and a clear trajectory.
“The Hillsborough Castle Agreement gives us all an advance preview of how the redundancy notice will look for British rule in Ireland!
“The future is all about a united Ireland and Sinn Féin is central to that. So this is the time for republican politics.”

Threat against Adams is ‘substantial’

Sinn Fein President Gerry Adams MP MLA has been told by Paul Goggins, British Minister of State, that following a recent ‘up to date threat assessment’, the threat level against him is at ‘Substantial – an attack is a strong possibility.’
In recent months Gerry Adams has received a significant number of warning from the PSNI that his life is at risk. In a letter from Paul Goggins, the British Minister said that following these threats he asked his officials ‘to obtain an up to date threat assessment on you from the Security Service’.
Commenting on the warning, Adams said:  “Those responsible for these threats have nothing to offer the people of Ireland. They have no strategies or political programmes and want to turn the clock back to conflict. They must be resisted and rejected. Neither I nor the Sinn Féin leadership will be intimidated or frightened by these groups. We are determined to pursue our republican goals of ending partition and Irish unity and of making the political institutions function and deliver for citizens.”