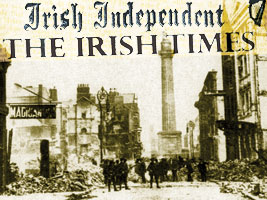 The view of Nelson’s Pillar down Henry Street, showing the devastation in Central Dublin after the Easter Rising

Sinn Féin president Gerry Adams reminded us over a weekend of Easter celebrations that the recent media attacks on Irish republicanism were bigger than just him.
He said that the onslaught was “about us, as a republican community” and that it was more about our integrity and the “just nature of our cause”. He was right.
Republicans should not be be deterred. Throughout the struggle the mainstream media has aligned itself editorially alongside our political enemies. They have served as organs of the middle class elite, the establishment parties and the British government - those who wish to maintain the inequality that the men and women of Easter 1916 endeavoured to dismantle.
So today’s republicans will find oddly familiar many of the headlines and commentaries carried in our popular Irish broadsheets in the days after the rebellion of 1916, the rebellion that shaped the political landscape of Ireland for generations to follow.
The Irish Independent headlined the rebellion as “Criminal Madness” and commented, “we confess that we care little what is to become of the leaders”. In its opening paragraph the Indo states: “No terms of denunciation that pen could indict would be too strong to apply to those responsible for the insane and criminal rising of last week”... “In one sense indeed it is too true that the ruin around us is the work of the common enemy, but Irishmen have been the agents for the commission of the crime, from the consequences of which it will take us many years to recover.”
It added: “When we come to think of what the incendiaries have accomplished the result is pitifully meager.”
Ninety-four years later the Irish people remember with pride those men and women that the Irish Independent labelled as criminals.
The Irish Independent underestimated the will of the Irish people of that era. Within a few short years a restructured Irish Republican Army, with the vast support of the Irish people, brought the British empire to its knees.
The Irish Times was gleeful at the arrival of that great British war criminal General Sir John Maxwell to sort out the pitiful insurgents. In its opening paragraph outlining his arrival it said: “The Government sent him to Ireland in order that he might suppress a dangerous insurrection, exact the necessary penalties and lay a solid foundation for the re-establishment of order and law. He has done, and is doing, this responsible work to the satisfaction of the Government, which nobody will accuse of indifference to Irish Nationalist opinion.”
You might find it difficult to understand how journalists, normally highly intelligent beings, so I’m told, misread Irish nationalist opinion. The following year, in May 1917, Sinn Féin won an important by-election in South Longford, followed 17 months later by the famous general election of December 1918, when 73 seats were won out of the possible 105 by Sinn Féin candidates, leading to the establishment of the first Dáíl.
Even amid the growing public disquiet over the death sentences meted out to some of the rebellion’s leaders, The Irish Times defended the executions, quipping: “It is now suggested that the sterner punishment has become indefensible, not because it may not be deserved, but because an unhappily large number of persons has deserved it. There is neither logic nor common sense in this complaint. Moreover, it is made by men and newspapers who have no acquaintance with the facts of individual cases. Only one man – Sir John Maxwell – can be in full possession of those facts, and the Government has perfect confidence in his discretion.”
And with the blessing of The Irish Times, Sir John continued to put Irish men to the wall, including as we all know, James Connolly, critically wounded, held upright as a target strapped to a chair.
Not to be outdone, The Irish News carried a grovelling piece. Its report, which lacked any real sense of public opinion, claimed 99% of the Irish people “would have been against the rising”.
“There was not a national uprising in Dublin,” it opined. “It was not even a sectional uprising. The whole sad business was conceived and planned, and carried into fatal effect without the knowledge or the sanction of the Irish Nation. Had it been possible to take a vote of the people of this country on the issue, 99 per cent of them would have declared against such an attempt without hesitation and with all the power of protest they could muster. In due time we shall discuss the varied influences that operated on the minds of the ill-fated leaders, who have paid the dread penalty of their own rashness, folly and credulity.
“But on the morrow of their doom, and while the fate of so many other victims is still undecided we hope the charity of silence will be extended to the dead. Ireland has already suffered bitterly through the ghastly events of the last days of April; but the hearts of her people are strong and their minds have been disciplined by trials and disappointments that would have made the men of any other nation despair of their country’s future and their own. Had the counsel of the National leaders been regarded, Dublin and Ireland would not have known the week of horrors whose aftermath must now be reaped in agony by thousands. The wise counsel of earnest and patriotic leaders will not be flouted henceforward by the most hot headed members of the Irish community.”
Ninety-four years later, the current editorial writers of these media outlets still fail to understand Irish republicanism.