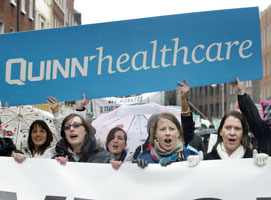 Quinn Insurance workers who turned out to protest at Leinster House

Sinn Féin’s elected representatives in Fermanagh South Tyrone and Cavan Monaghan have rallied to make the case for saving Quinn Group jobs after Quinn Insurance was placed into administration by the new 26-County financial regulator last week.
Cavan Monaghan TD Caoimhghín Ó Caoláin was part of an all-party delegation who met the regulators and Quinn workers earlier this week. Ó Caoláin said that his primary aim was to highlight “the concerns of the employees we represent” and that “retention of existing employment” was key to the region.
Sinn Féin MP for Fermanagh South Tyrone, Michelle Gildernew also met this week with Quinn Group workers, as well as with the Cavan Chamber of Commerce, the Central Bank of Ireland, the administrators and the Financial Regulator.
Gildernew said she had lengthy discussions with both the administrators and the regulator, where her “primary concern was the security of the thousands of jobs at stake and the welfare of those employed by the Quinn Group”. Gildernew urged the regulator to bear these workers in mind when they made their decision on how to proceed with this matter”.
“There is much more work needed before a satisfactory resolution can be reached and I am ready to continue playing whatever role I can in this process,” the northern minister said.
There are two key issues in the Quinn crisis – regional economic development and financial regulation in Ireland. At stake is the potentially drastic impact on the regional economy of four counties and the local communities there that make up much of the 5,500-strong Quinn Group workforce.
Quinn Insurance was a key element of the wider group, whose activities involve quarrying, cement manufacture, hotels and leisure, renewable energy, glass manufacture, plastics, and pharmaceuticals, as well as property and retail development.
The Quinn Group is the sum of its parts and the profits from the health, home and motor insurance divisions were key to the success of the wider group. For decades there has been no real government economic development strategy in this region, but there was the Quinn Group, which, despite its corporate mistakes and impropriety in Anglo Irish share deals and questionable financial transactions, still became the hub of economic activity in this neglected area.
Lack of effective banking and financial regulation created an environment that allowed Quinn Group expose itself to a €2.8 billion loss in Anglo Irish and a €4 billion overall group debt.
Now it is a financial regulator with newfound zeal who might asset strip what is still a profitable group in coming weeks and months. The real losers here won’t be the Quinn family or Anglo Irish. It will be the townlands from Cavan to Fermanagh who will pay the ultimate price, of lost jobs.
There is widespread agreement that Quinn Insurance is a viable business; there have already been expressions of interest from potential buyers, but the group that has become a regional economic asset must be preserved as that.
What happens to the Quinn Group in the coming weeks will be the acid test of the resolve of the coalition government’s policy promises, many cabinet members of which refused, perhaps tellingly, to take Sean Quinn’s phone calls last week.