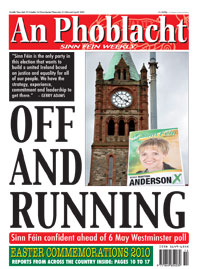 Sinn Féin President Gerry Adams has welcomed the announcement by the British Prime Minister Gordon Brown that the general election will take place on 6 May.
Adams said:  “Sinn Féin have been preparing for this election for some months. Our activists have been out on the doorsteps and we now look forward to the campaign.
“Coming after the successful conclusion of the negotiations at Hillsborough and the transfer of powers on policing and justice, this election will provide an opportunity for people to recommit their support for the Peace Process and for the process of change which we have been central to driving forward.
“Sinn Féin never take the electorate for granted but I am looking forward to this election campaign. I am looking forward to getting out on the campaign trail and looking forward to connecting with voters in every constituency. I am confident that people will respond to the leadership we have given in the negotiations, the political institutions and in the wider peace process.
“Sinn Féin is the only party in this election that wants to build a united Ireland based on justice and equality for all of our people. We have the strategy, experience, commitment and leadership to get there.”

Sinn Féin Assembly member for North Belfast Gerry Kelly was on Wednesday morning on the campaign trail in his constituency. Kelly is the only candidate in the field who can win the Westminster seat for nationalism.
“The figures in the last number of elections clearly show that a nationalist candidate can win the North Belfast Westminster seat,” he told An Phoblacht.
“They also clearly show that Sinn Féin is the only party who can win this seat from Nigel Dodds and the DUP.
“Of course this is most likely if nationalists unite around Sinn Féin and unite around the common goal of Sinn Féin’s equality campaign. Winning this seat for nationalism for the first time in this constituency’s 125 year history would break the DUP veto on equality for all. Sinn Féin has been steadily closing the gap on the DUP in the North Belfast constituency in recent years. We are now best positioned to take this seat. A vote for any other nationalist candidate is a wasted vote.
“The DUP under Nigel Dodds in North Belfast have used their status to block every aspect of equality, especially in relation to leisure provision and house building programmes aimed at tackling chronic need. We now have a huge opportunity to make an historic breakthrough for the whole community.
“The victory achieved last week at Belfast City Council when the SDLP finally joined with Sinn Féin to ensure proper changing facilities on the ‘Cricky’ pitch site for local GAA teams is an example of what can be achieved. It is an example of how a negative, sectarian agenda can be defeated.
“It shows us that nationalists uniting in North Belfast to defeat the old agenda is possible and it is possible again on 6 May.