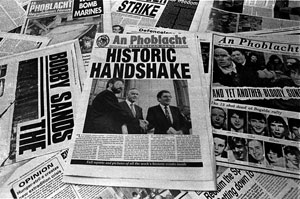 IN a significant development, An Phoblacht, the voice of republicanism, is soon to be transformed. In the coming weeks the print edition of the republican paper will become a monthly publication and a brand new An Phoblacht website will be launched, including an online daily news service; up-to-the-minute videos featuring interviews; historic film footage; and an archive section with access to thousands of photographs and historic republican material including back issues of An Phoblacht/Republican News.
The newly-designed, monthly print edition of An Phoblacht will be complemented by a range of republican publications, including the republican magazine IRIS, which is to appear quarterly, and the highly popular Republican Legends booklet series.
Speaking about what he described as “a major step forward” for An Phoblacht, Sinn Féin Director of Publicity Seán Mac Brádaigh said this week that in a rapidly changing media world, An Phoblacht needs to move with the times.
“Over 100,000 people now read the paper online. A radical republican political agenda is needed in this country more than ever and we believe it is time for republicans to embrace the new media age and get our message out to as many people as possible.
“Things have moved on from the days when An Phoblacht was really the only outlet in Ireland, North or South, where you could hear the republican message.
“What is needed now, and indeed demanded by our readers, is the ability to delve deeper into the issues that affect Irish society. The new monthly format for the print edition will lend itself much more to in-depth features, interviews and political analysis.
“Republicans also still want a platform for ideas, discussions and debate.  An Phoblacht has provided such a platform but we need to build and strengthen that; we need to make it more widely used and known.
“Recent years have seen phenomenal growth for Sinn Féin across Ireland. We are in government in the North. We have TDs, MLAs MPs an MEP, a Seantor and hundreds of councillors across the island. That level of growth for the party has affected the conditions in which we operate and means we need to fine-tune all aspects of our publicity operation to better respond to those conditions. There are huge opportunities and challenges there.
“While overt state censorship of Sinn Féin is long gone, the party is still at the receiving end of incredibly distorted and biased coverage in the establishment media. This means that it is just as important as it ever was that we have our own means of getting the republican message out, unmediated and direct.
“An Phoblacht is a very distinguished title with a long and proud history in republican politics. The paper has survived state harassment on both sides of the border, raids, arrests, imprisonment of staff and even assassinations. An Phoblacht is still here and it will continue long into the future. These latest developments bring it bang up to date with the political and media environment of 2010.
“In its new format, An Phoblacht aims to meet the challenges of the modern political media environment and not just survive but grow. I believe that with the active support of republicans throughout Ireland we can do that.”