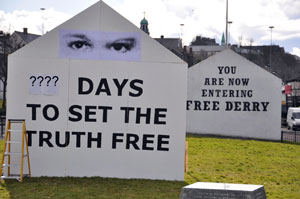 The Bloody Sunday families on Monday issued a statement saying that while the families were glad to hear the Secretary of State’s most recent comments on releasing the Saville Report, they further insist that Shaun Woodward should “pull out all the stops” to publish the Inquiry report before the forthcoming election.
Gerry Duddy, whose 17-year-old brother Jackie was the first fatality of Bloody Sunday, said: “I’m sure all the families and wounded will be glad to hear that Shaun Woodward has claimed to be doing his best to release the report before the general election and dissolution of Parliament.
“However, it must be pointed out that if Shaun Woodward had not insisted on carrying out these security checks in the first place, then Saville’s final report into Bloody Sunday would have already been released to the families before now.”
Duddy again spoke of the unacceptable NIO proposals for the planned pre-read, and also expressed the importance of families and wounded receiving a few days prior warning of any release date.
“We must again reiterate our frustration at proposals that just one member per family will be given access to a pre-read and we have demanded that Shaun Woodward reconsider this issue. This is simply too much pressure for one member of any family involved.
“Families also need to be given prior notice of the report’s release in order to mentally prepare themselves for what will undoubtedly be a sensitive and difficult time,” he added.
“However, the families remain anxious that we receive the report sooner rather than later. We have waited long enough to hear the truth and believe that Shaun Woodward should pull out all the stops to get this report out before the election is called.”