Love and tolerance in the Orange Order 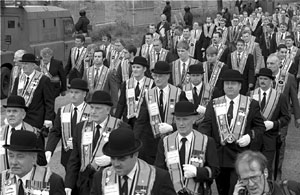 It’s not bigotry that propels the Orange Order to protest against the forthcoming papal visit to England and Scotland and it’s not racism to allow members to stand for the British National Party, or so the leaders of the Orange Order would like us to believe.
According to the Orange Order the motivation behind these recent decisions has been ‘love’ and ‘toleration’. Grand Lodge Chaplain and Free Presbyterian moderator Ron Johnston claimed that the Order’s call for mass protests against Pope Benedict’s visit stems not from “bigotry or hate but out of love and loyalty to the Saviour”. Johnston dismissed those critical of the Order’s protest call as “prejudiced” “unjustified” and “bigoted”.
In a statement the Order said the teachings of the Catholic Church were at “total variance with the Biblical message” and called on all citizens to demonstrate their opposition to the Pope’s visit.
The statement followed comments by a DUP MLA, Ian McCrea, who said any visit by the Pope to “Northern Ireland” must be “vigorously opposed”. McCrea went on to say that the Pontiff would not be welcome because most Protestant denominations here believed “the Pope was the Antichrist”.
But if DUP members were backing the Orange Order’s call for mass protests against the Pope’s visit, the leader of the UUP was calling for caution. Demonstrating against the Pope might be “unwise”, warned Reg Empey.
Unfortunately, for anyone looking to the UUP for more enlightened unionist leadership, Empey’s opposition stemmed solely from wishing to avoid putting Britain’s queen “in a very difficult position”.
“The danger for some Orange brethren is that they need to be careful of the position the Queen is in as head of state,” said Empey.
Meanwhile, the Order rejected calls for the expulsion of a prominent Orangeman after it was revealed that he would be contesting a Westminster seat on behalf of the British National Party. A Grand Lodge spokesperson refused to comment on the BNP candidacy of leading English Orangemen Nick Baker.
“People stand for all sorts of political parties and their political affiliations are purely personal,” he said.
The leader of the Orange Order in England, Ron Bather, also refused to condemn the candidacy. “We are not dictators. As an institution we try not to interfere with the political views of any of our members,” said Bather.
“We’re not a far right organisation. We have members from all over the world but our members are entitled to stand for whatever political organisation they so wish,” he said.
Well, entitled in as much as being able to stand for any political party of choice that supports the British Monarchy. The Orange Order is both exclusively Protestant and loyal to the Crown.
According to the media, the daughter of Nick Griffin, the leader of the British National Party, has recently moved to County Down in a move to build the party in the north of Ireland.
Commenting, Sinn Féin MLA Martina Anderson said while there was no place for racism and bigotry, some people in the Protestant community were attempting to build on more progressive notions within their history and culture of civic duty and democracy.
“Unfortunately, links between unionist organisations, from the Orange Order to paramilitaries, and British racists and fascists, have a long history. It is a rational meeting of minds in as much as both are underpinned by the fundamentally flawed objective of creating an organisation, and society, around one exclusive notion of ethnicity and identity,” said Anderson.
“Citizenship based on such a notion will inevitably lead to discrimination and persecution. Republicans believe citizenship must be inclusive and is best served by putting human rights and equality at the heart of governance. That’s why we placed great emphasis on both during negotiating the Good Friday Agreement, St Andrews and the Hillsborough Accord.”