A Good Friday - for the banks 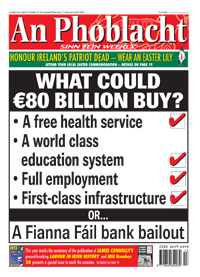 On Tuesday, 30 March 2010, Brian Lenihan –  Minister for Finance in a state with a €20 billion deficit and almost 450,000 people unemployed – stood before the Dáil and announced that over the next number of years Ireland will pump €80 billion into five wayward banks.
In carefully co-ordinated statements, the National Asset Management Agency (NAMA), the Financial Regulator and Lenihan revealed the details of the largest financial bank bailout, proportionately, in the western world.
First up was NAMA, which announced the discount it will apply to its toxic loan transfers from the banks’ books. The first load of these loans will be transferred on Good Friday.  The average 47% discount, up from the earlier announced 30%, cannot be seen in a good light. Because of the extent of government buy-in with the banks, any cent less that NAMA pays for bad loans has to be met by recapitalisation. This will come, in the most part, from the state.
The fact too that NAMA first claimed it would pay 30% less for the loans, then 47% because of falling property prices, cannot be ignored. One must ask how much these property prices will continue to fall by, which could make the lower price NAMA is paying for them still too high by the end of the year.
Next up was the Financial Regulator, which had what could be considered the only partial positive news of the day. It announced that banks would from now on require an 8% core tier 1 capital requirement, up from 4%. It was this low capital ratio (the amount of bank reserves they must hold as a percentage against their risk-weighted assets) that many believed helped to cause the bubble. Not everything was good news though – the Financial Regulator has already allowed a temporary exclusion for EBS from this capital requirement until the end of May.
At 5pm the big speech came from the Minister for Finance, Brian Lenihan. He set out the details of the recapitalisation needed by the banks after NAMA takes the loans off their books, to bring the banks up to the new 8% capital requirement. Much of what he said had been speculated about correctly. Bank of Ireland will need €2.7 billion. AIB, €7.4 billion. Irish Nationwide, €2.7 billion. EBS, €875 million. In the case of the two main banks, the government wants to convert the preference shares it already holds in the banks into ordinary shares. It hopes the banks can raise some of the money from private interests, selling off assets (like AIB’s subsidiaries in the U.S., Britain and Poland) and obviously the government is giving the nod to charges increases, such as AIB’s interest rate hike this week.
The fact that householders and small businesses are the only reliable source of funding for the banks, that squeezing them could result in defaults which would mean further toxic loans on the banks’ books, is being ignored.
After the banks raise money, if they can, the government is giving the banks ‘promisory notes’. These will allow them to draw down the full amount of recapitalisation if needs be from the state over the next 10-15 years. It’s expected €1 billion will be drawn down this year.
All of this was shocking enough, until Brian Lenihan set out the details of Anglo-Irish bank. This bank immediately needs €8.3 billion in capital and a projected €10 billion by the end of this year. And this for a bank that is not operating in any way shape or form, except to award some of its staff pay increases.
The scale of the money being casually distributed by the government is incomprehensible to most people, but to put it in perspective, we endured an entire year of lectures last year from the same government about the need to reduce a €24 billion deficit in the December 2009 budget. The €4 billion they took came from people’s wages, social welfare rates and public services. The government plans to take another €3 billion-€4 billion from the deficit at the end of this year. But today it committed us to spending €80 billion on a bank bailout. This means that every year as the government reduces the deficit, it will be lobbing a few billion onto it to meet commitments to the banks. The economy will be running to stand still for the next 10-15 years.

SINN FÉIN RESPONSE
Speaking in response to the announcements, Sinn Féin’s Arthur Morgan said the government had opened a Pandora’s box of debt and that there was no way of knowing if the figures announced on Tuesday would even meet what the state has been tied to. He also pointed out that everything that was happening in the bailout could be attributed to a golden elite in self-preservation mode.
“This isn’t about a rogue group of bankers and developers – this is about a parasitical section of our society wedded to the two largest political parties in this state,” he said. “We won’t get rid of this culture of exploiting ordinary people, like those injured and killed on unsafe building sites owned by Liam Carroll as he lined his own pockets, until we get beyond FF and FG led governments.”
Morgan also delved into the murky dealings being revealed about the Dublin Docklands, highlighting the links between the debacle and others like it, and Fianna Fáil and the banks. He called on the government to put their so-called economic strategy to the country in a general election.

•    Banks need up to €32 billion of recapitalisation
•    €18.3 billion of this figure will be given to Anglo-Irish
•    State will commit to fund this amount from Irish taxpayers over the next 10-15 years
•    Average discount of 47% on toxic loans transferred to NAMA, which will purchase €81 billion of loans in total
•    First tranche of loans coming from top ten developers, totalling 1,200 loans and will be transferred on Good Friday
•    In first month NAMA alone will buy €16 billion in loans for €8.5 billion
•    Transfer of all NAMA loans to be complete by February 2011

For the full speech from Arthur Morgan, see www.sinnfein.ie