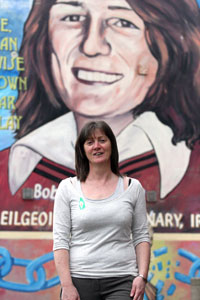 IT’S that time of year again, Easter ,when Irish republicans commemorate our patriot dead and rededicate ourselves to the struggle. In the aftermath of a very successful Sinn Féin Ard Fheis the mood heading into Easter is very upbeat. “We’re expecting a large turnout for this year’s events”,  Mary McArdle of the National Commemoration Committee says.  “Republicans are very conscious of the importance of commemorating our dead and  especially in the run-up to the hundredth anniversary of the 1916 Rising. We are on the countdown to a very important anniversary in 2016, so that will be a big focus for us in the coming years. The Sinn Féin Irish Unity Task Force has been hosting conferences on the theme of unity and this is a theme that will be at the core of the buildup to the hundredth anniversary.”
The Commemoration Committee is at the final stages of making its arrangements for Easter. “Events are planned all over the country and range from wreathlaying to the large commemorations like those held in Dublin and Belfast. There will also be commemorations overseas. Tom Hartley will attend events in Canada and Alex and Paul Maskey will be attending commemorations in the United States. It’s about Sinn Féin going out and engaging with the Irish communities abroad.”
Recent years have seen additional colour being brought to Easter events. “There will be pageantry along with the usual bands. It is always encouraging to see well attended commemorations, especially ones that include young people in the events in creative and imaginative ways, for example, through the use of drama, poetry and pageantry.”
There will also be a civic ceremony in Navan Town hosted by Sinn Féin Councillor Joe Reilly. “For the first time ever Navan Council will hold a special Easter event hosted by the Mayor, Joe Reilly, in Navan Town Hall where the National Flag will be raised followed by the reading of the Proclamation.  This event will take place at 1pm on Easter Thursday and everyone is welcome to come along.
Mary emphasises the importance of wearing an Easter lily. “The Easter Lily is a symbol of remembrance and, not only that, it’s also a symbol of Irish Unity, so everyone should wear one.”
Gerry Adams will be the main speaker in Belfast and Gerry Kelly will be the speaker for Dublin. Anyone requesting speakers or further information should contact Mary McArdle  at [email protected]