The Irish Unity Pledge and Canada 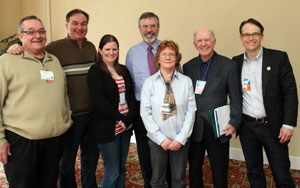 BY SEÁN ADAMS AND KEVIN CALLAGHAN

This year’s Ard Fheis heard an address by Warren Allmand, former Canadian Attorney General, human rights activist and longtime supporter of peace, unity and justice in Ireland. Allmand first visited the Six Counties in 1966 as part of a Canadian parliamentary delegation and returned on several occasions in the 1990s as an international observer monitoring contentious Orange Order parades.
In Canada, Allmand has worked tirelessly raising human rights issues and Irish unity both in parliament and throughout the country, campaigning on issues such as discrimination in the workplace, plastic bullets, the Rosemary Nelson case, the RUC, and the Good Friday Agreement.  In particular, he has been a strong supporter of the initiatives taken by Sinn Féin to make the agreement workable and to ensure its full implementation.
In November of 2009, Allmand was one of five main speakers, including Gerry Adams, who participated in the Irish Unity Conference in Toronto. Other speakers included MP Charlie Angus, Chris Axworthy, former Attorney General and Minister of Justice of Saskatchewan, and Manon Perron, Secretary/Treasurer of the Montreal executive of the Confederation of National Trade Unions. Attended by over 300 people, the Conference was a major success both in addressing the question “A united Ireland: How Do We Get There?” and in mobilising Canadian supporters of the Irish Unity Pledge.
In just four months, the Canadian Irish Unity Pledge has garnered support from across the country. The Pledge is sponsored by Friends of Sinn Féin (Canada), Québec Ireland Committee (Montréal), Durham Committee for the Irish Unity Pledge, Emerald Isle Social Club (Toronto), and the Toronto Teachers for Irish Unity. Other activists throughout Canada are organising support for the Pledge in their communities and co-ordinating their activities with Toronto and Montréal.
The Irish Unity Pledge campaign aims to win a public commitment in support of Irish unity from Canadian politicians, trade unionists, First Nations, academics, Irish community groups and prominent individuals. Signatories include Warren Allmand; MPs Charlie Angus and Pat Martin; Steve Kent (Member of the House of Assembly, Newfoundland); Amir Khadir (Member of National Assembly, Québec); The Montréal Council of the Confederation of National Trade Unions); Sid Ryan (President, Ontario Federation of Labour); Stephen Augustine (Hereditary Chief on the Mi’kmaq Grand Council); Kevin Tierney (film producer); authors Elenor McGrath, Teresa O’Driscoll and Cindy Stone; singers Jimmy Carton and Finny McConnell; academics Dr. Ninian Mellamphy (University of Western Ontario) and Dr. Garth Stevenson (Brock University); Canadian County Board of the Gaelic Athletic Association; and Pat Rooney (President of the Emerald Isle Seniors Society, Toronto).
The success of the campaign can be illustrated by the rapidly growing number of high profile signatories to the pledge and the thousands of citizens they represent, and by the widespread support for Irish unity in Canada.
For a full list of all the signatories to the Canadian Irish Unity Pledge, visit www.irishunitypledge.com and check back regularly as the number of supporters continues to grow. Readers can also become a fan on the Facebook page of the Irish Unity Pledge, keep up to date on the Canadian campaign, and join in discussions.
An Phoblacht
44 Parnell Sq.
Dublin 1
Ireland