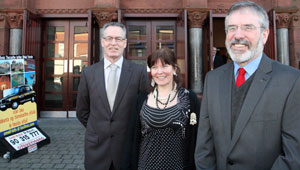 Sinn Féin President Gerry Adams was in the Chultúrlann on the Falls Road last Thursday to meet with groups and organisations based in the pioneering cultural centre. He was there to celebrate a funding coup for the campaign to establish a Gaeltacht Quarter in Belfast.
He announced that, following a six-year campaign to secure funding for the Chultúrlann to become a flagship project for the establishment of a Gaeltacht Quarter in Belfast, a commitment had finally been secured from Minister Nelson McCausland to release the funds for the project.
“This will not only be an important injection of investment for An Chultúrlann, which is already the heartbeat of An Ceathrú Gaeltachta. This is also evidence of local delivery of the kind which Sinn Féin has been demanding and which will help to turn the ambition of the Gaeltacht Quarter into a reality.”