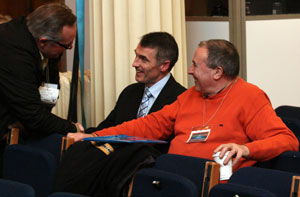 Declan Kearney and Mitchel McLaughlin at the Ard Fheis

The Ard Fheis adopted an emergency motion welcoming the agreement reached at Hillsborough between Sinn Féin and the DUP. The motion recognised the deal as delivering on the mandate as adopted by the special Ard Fheis on policing in January 2007.
Proposing the motion, Martin McGuinness said that in 2009 he advised the Ard Fheis that he was concerned that a minority of Unionist politicians opposed to change were undermining the will of the majority:
“This was untenable and undermining the political institutions. Despite this the two governments and other parties tried to live in denial. That was an approach that we needed to challenge and change. We did that. In very frank discussions we made it crystal clear that if the institutions did not work on the basis of partnership and equality, we would play no future part in them. That is what led us into the recent negotiations at Hillsborough. This was a negotiation that happened because we made it happen.”
He said the agreement was a challenge to “those who have spent recent years backbiting or in the case of the former leader of the SDLP, soundbiting from the sidelines”.

MISSION STATEMENT ON IRISH UNITY
The Ard Fheis adopted a Mission Statement on Irish Unity which will be a central part of the work of the party’s United Ireland Task Force. Speaking on Irish Unity, Sinn Féin Dáil leader Caoimhghín Ó Caoláin said:
“Do we constantly have to remind journalists and broadcasters and State agencies and people in public life that Ireland does not stop at Dundalk or Monaghan or Lifford? The population of Ireland is 5.9 million, not 4.2 million.
“The United Ireland we seek is not a 32-County version of the State and the economy of the 26 Counties. It is not a cobbling together of the two existing jurisdictions. It is a new dispensation, a new political reality on this island.
“The question should not be ‘Can we afford a United Ireland’? The question should be ‘Can we afford not to unite Ireland?’ We have a small island with three governments in Dublin, Belfast and Westminster. As our proposed Mission Statement on Irish Unity states partition ‘disrupts and distorts community, social and cultural life as well as trade and commerce, and entails waste and duplication in public services. The full social, economic, cultural and political potential of the island of Ireland and its people can best be realised in the context of an end to partition.’
“The historic mission of this party is to end Partition and build a New Ireland.”
Party Chairperson Declan Kearney told the Ard Fheis:
“Our political strength and strategy are key to ensuring the agreements accelerate the transition to a United Ireland. Make no mistake, Sinn Féin is the only united Ireland show in town. There is no alternative to this party’s strategy from either constitutional nationalists or the militarists.”
Rita O’Hare spoke in support of a motion noting the continued relevance of the MacBride Principles of Fair Employment, 25 years old this year. Francie Molloy spoke of the flawed nature of the Eames/Bradley Report and the need for an Independent Truth Commission.