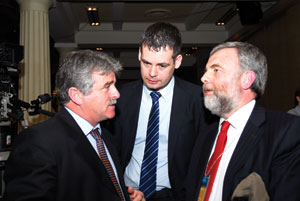 Opening the economy and workers’ rights section on Saturday, ICTU and SIPTU President Jack O’Connor said that “the cause of Ireland has become the cause of bankers”. After referencing the James Connolly quote, O’Connor added: “Indeed, in many ways we have exchanged subservience to British rule for subservience to the financial markets.”
O’Connor reflected the sentiments expressed in last year’s pre-Budget submission The road to recovery, saying “In this jurisdiction we are living through the truly awful experience of policies which are aggravating, rather than addressing, the current economic, fiscal and banking crises.
“And while the Pension Reserve Fund built up by the citizens of this jurisdiction during the boom years is plundered to appease the insatiable appetites of the zombie banks, our Government is pursuing a deliberate policy of cutting pay and allowing unemployment to soar upwards in order to drive down wages in the private sector with all the attendant human misery this involves.” He added that “social cohesion has been sacrificed on the altar of appeasing the financial markets in the interests of rebuilding what they call ‘bondholder confidence’.”
He said that the culmination of the government’s economic mismanagement would inevitably be an “intensive campaign of industrial action to leverage a fair agreement.”
The ICTU president was followed by Mitchel McLaughlin, finance spokesperson in the Assembly and Arthur Morgan, finance spokesperson in the 26 Counties. McLaughlin addressed the lack of fiscal authority in the Six Counties, while Morgan set out the Sinn Féin alternative to government policy, which includes stimulating the economy through creating jobs and investment and overhauling the taxation system. “Ireland’s future competitiveness cannot and must not be based on a low wage, low tax system,” he said. “We cannot hope to build the kind of physical and social infrastructure needed to improve our competitiveness if we continue to cut taxes as some in the business community are demanding.”
Sinn Féin economic advisor Joanne Spain spoke about the various policy documents produced by the party last year, including the two pre-budget submissions, Getting Ireland back to work, Awakening the west and reports on banking, agri-food, farming and fishing, and tourism. Saying their proposals if implemented would transform the Irish economy, she added one more suggestion to save the economy.
“I think we should send Maurice Quinlivan over to Brian Lenihan’s office,” she said. “After all, he managed to get rid of over €200,000 worth of waste in the Department of Defence in one day.”
Barry McElduff commented on the recent competition launched by President Mary McAleese, ‘Your Country, Your Call’, which has two €100,000 awards for the two winning ideas to save the economy.
“I have an idea. Lift the border,” he said, explaining the impediment of the border to economic progress and success.
Caoimhghín Ó Caoláin spoke about NAMA and called for it to be abandoned. “There is no doubt about who Fianna Fáil and the Greens are serving with NAMA,” he said. “It is a bailout for the greediest and the most corrupt in Irish society – the bankers and the speculators whose boundless avarice has devastated the Irish economy.”
Mary Lou McDonald lashed out at the government’s attacks on social welfare and the minumum wage. “Sinn Féin has stood very much alone as a political party in our defence of social welfare and the minimum wage. We have stood alone, but we stand in the right,” she said. “We do not believe the answer is to place the burden on the lowest paid in society. It is not those on €200 per week, nor those on €8.65 per hour that caused the recession. Deepening the divide in this society and forcing hundreds of thousands into poverty will not only have a lasting impact on Ireland, it will not solve the deficit problem.
Guest speaker Paula Clancy (Director of Tasc, the Think-Tank for Action for Social Change) closed the session. She called for urgent reform of the tax system and pointed out how even in the boom years, little was done to tackle inequality.
“As long as the better-off are shielded from tax by a glut of tax breaks, inequality will persist and public services will not be improved,” she said. “Last year, Tasc estimated that tax breaks cost the state €7.4 billion. Ireland’s use of corporation tax breaks alone is seven times the European average.”
Finishing the session on a positive note, she added; “We may be struggling with recession and unemployment and a lack of economic stability, but this is the moment to consider a new vision for Ireland – one that is rooted in the idea of wellbeing and of social wealth and recognises the ecological imperative of adopting a more sustainable approach to economic growth.”
An Phoblacht
44 Parnell Sq.
Dublin 1
Ireland