Remembering the Past: Thatcher 'hopping mad' at extradition victory 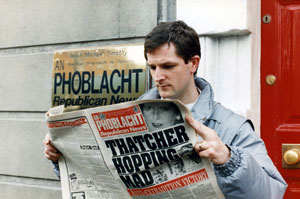 British Prime Minister Margaret Thatcher was described as “hopping mad” and “spitting blood” in 1990 when the Supreme Court in Dublin delivered a significant judgement that set back efforts to establish an extradition conveyor-belt for republicans from the 26 Counties to the North and to Britain.
The decision of the five Supreme Court judges was delivered in the cases of Jim Clarke of Donegal and Dermot Finucane of Belfast. Both had taken part in the mass breakout of IRA prisoners from the H-Blocks of Long Kesh in September 1983. Up to the early 1980s courts in the 26 Counties had refused to extradite republican prisoners to the North and Britain because the extradition requests were covered by the ‘political exemption’ which in Irish and in much international law ruled out the handing over of people to other jurisdictions when they were sought in connection with politically related offences.
While the political and judicial system in the South had no qualms about jailing republicans in their jurisdiction, the bar on political extradition remained in place. Among the republicans whose extradition to the North was refused by the courts was Rita O’Hare of Belfast in 1973. However, in the wake of the 1985 Hillsborough Agreement, the Fine Gael/Labour Government introduced a new Extradition Act which was intended to end the political exception.
Fianna Fáil left the Extradition Act in place when they came into office. A number of the 1983 H-Block escapees were arrested and held on British extradition warrants. Among them was Robert Russell who lost his Supreme Court appeal in 1988 and was extradited to the North amid widespread protests by republicans. The Supreme Court judgement in the Russell case was especially harsh and appeared to have put paid to the political exemption.
In the case of Clarke and Finucane, however, the Supreme Court took account of the fact that no action had been taken against H-Block prison warders who had beaten prisoners in the wake of the 1983 escape. The Court accepted that, if extradited, Clarke and Finucane would be in danger of ill-treatment. A majority of the judges also upheld the political exemption with Justice Walsh stating that “the use of violence of itself does not take an act out of the political exemption” and warning politicians that “extradition cannot be treated as a matter of foreign policy”.
Clarke and Finucane walked free from the Four Courts and the British tabloid press went wild. The Sun described the two men as “human garbage”. Dermot Finucane’s brother Seamus thanked the legal team and said he was “glad they don’t have to operate in the North because it’s for defending cases like this that my brother was murdered”. Their brother was solicitor Pat Finucane, murdered by agents of the British government in 1989.
Jim Clarke and Dermot Finucane were released after a significant Supreme Court judgement refusing their extradition on 13 March 1990, 20 years ago this week.