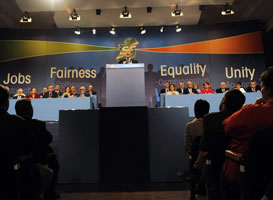 All of this is possible. Jobs can be protected. Jobs can be created. Frontline public services can be sustained and developed if public finance is raised in a fair way. This means real social solidarity. This means uniting public and private sector workers, not dividing them.
Among our proposals are:

Martin McGuinness congratulates Gerry Adams at the end of his speech