A good day for the peace process 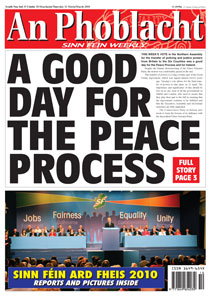 ThIS WEEK’S vote in the Northern Assembly for the transfer of policing and justice powers from Britain to the Six Counties was a good day for the Peace Process and for Ireland.
Despite the blatant electioneering of the Ulster Unionist Party, the motion was comfortably passed in the end.
This transfer of powers is a long overdue part of the Good Friday Agreement, which was signed almost twelve years ago. Tuesday’s vote allows for the final transfer of powers to take place on 12 April. The importance and significance of this should be lost on no one, least of all the governments in Dublin and London, who need to ensure that they play their part to the full in ensuring that the Agreements continue to be fulfilled and that the Executive, Assembly and All-Ireland structures are fully supported.
The Conservative Party in Britain also needs to learn the lessons of its dalliance with the discredited Ulster Unionist Party.

Transfer of policing and justice powers set for April

• UUP's Reg Empey
Policing and justice powers will be transferred to the north by 12 April after a historic vote in Stormont on Tuesday. For the first time, all communities in the Six Counties can now take ownership of policing and justice policy, structures and personnel through the mechanism of democratic accountability and its power-sharing institutions.
Speaking in the chamber during the debate prior to the vote, Sinn Féin’s Martin McGuinness said the Hillsborough Agreement had provided an opportunity for a new start.
“The process we are engaged in is one in which no one single party can dominate and control. It is one which we must all work together for the common good. It is one which we must all work together to maintain the political stability which will deliver prosperity, quality public services and investment,” said the Deputy First Minister.
“I acknowledge that this is a challenge for us all but it is one to which we must all rise. We need to put aside party political posturing and begin an era of joint and equal working,” said McGuinness.
DUP leader Peter Robinson described the moment as “defining” and said he believed it was “time for us all to move forward”.
“There must be no going back to the bad old days of the past,” he said. “Throughout history there are times of challenge and defining moments. This is such a time. This is such a moment.
“Leadership is not about what’s easiest or what best suits our party interests; it is about doing what is right for our people.”
The DUP leader was referring to the Ulster Unionist Party, which, regardless of all entreaties, had refused to support the transfer of powers. Speaking in the chamber UUP leader Reg Empey reiterated his party’s rejection and accused others of “blackmail and bullying”.
“As a democratic political party we pledge to make power sharing work in an inclusive manner for all the people,” said Empey. Opinion polls had shown not only unanimous support for the transfer of policing and justice within nationalist communities but a majority of unionists also in favour.
Just hours before the vote, PSNI widow Kate Carroll pleaded with the UUP to join politicians from all sections of the community and support the transfer. Her message to unionist politicians was clear, “get on with their job”. The UUP might claim to be working for everyone, but even when the overwhelming majority of people disagreed with party policy, it was back to the old UUP adage of “we know best”.
The best answer to rejectionists, whether it is political or those people who believe that violence is the way forward, would be a unanimous vote in the Assembly in support of the transfer of policing and justice powers, Martin McGuinness had told the Sinn Féin Ard Fheis at the weekend.
A unanimous vote may have been the best way forward but it wasn’t the only way forward. With all other parties offering their support for the agreement hammered out at Hillsborough, rejection by the UUP was unfortunate but hardly significant.
No longer the political powerbrokers of the North, no longer the unchallenged unionist elect, nothing illustrates the UUP’s reversal of fortunes more than their decision to vote no to the transfer of policing and justice this week.
It had little, if anything, to do with policing and justice. Indeed, the UUP’s wish list of demands betrayed as much. The UUP demanded a return to educational selection and a right of veto on all executive decisions as a prerequisite of securing a favourable vote.
But all of this was just window dressing. The real driving force behind the UUP’s decision is electoral rivalry with the DUP and forthcoming elections. If the DUP was at all vulnerable to the naysayers within its own ranks, the UUP was determined to exploit every difficulty. In the event, the DUP executive secured the unanimous support of its party members. If the UUP hoped to undermine DUP unity of purpose, they failed.
Commenting on the UUP decision to vote against the transfer motion, Martin McGuinness described the party’s negotiation stance as dysfunctional. In his view the UUP were “opposed to the transfer for cynical party political reasons”.
“The UUP are on record as stating that they will not support the election of a local minister to oversee the administration of policing and justice until there is an agreement to test 10- and 11-year-old children to determine which school they will attend. I have to say that these are the most dysfunctional political positions I have ever come across,” said McGuinness.
It was late in the afternoon by the time the vote was taken. Out of 105 votes cast, a total of 88 were in support, with only UUP MLAs voting against. The motion was supported unanimously by all republicans, all nationalists, the Alliance and independents. It was also supported by the majority of unionists.
The decision has been welcomed by the Irish and British governments, as well as by the U.S. Administration and American investors. In a joint statement, Taoiseach Brian Cowen and British PM Gordon Brown described the vote as a “significant step forward”.
“It sends a clear message of confidence in the future and commitment to build on the gains of the Peace Process that have been achieved over the last 12 years,” they said.
Irish President Mary McAleese praised the deal, which she described as “a major milestone”. U.S. Secretary of State Hillary Clinton said the vote had been “an important step in ensuring a peaceful and prosperous future for all the people of Ireland”.