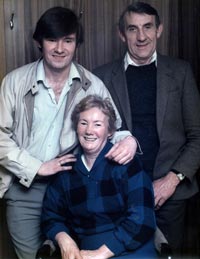 Kitty and Mickeen with their son John

MICKEEN O’SULLIVAN – Whatever you say, say nothing

BY TOIRÉASA FERRIS WITH ELLA O’DWYER

KERRYMAN Mickey Donal O’Sullivan, known locally as Mickeen, is this year’s Munster honouree for the annual Le Chéile function. Mickeen is from one of Ireland’s staunchest republican counties, a place that has seen some of the worst events in the fight for freedom in Ireland.