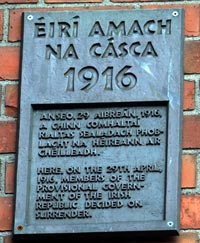 Battle of Moore Street not over yet

The battle to save 14-17 Moore Street, the historic battle site and final meeting place of the Provisional Government of the Irish Republic at Easter 1916, is far from over. While the site has been designated a National Monument, a developer plans to level most of it apart from some outer walls of the four buildings.
25 members of the Oireachtas have now lodged with An Bórd Pleanála a formal objection to the revised planning application from Chartered Land for a major shopping mall development in the Moore St./O’Connell St. area.
Seventeen TDs and eight Senators, representing Fianna Fáil, Fine Gael, Labour, Sinn Féin and Independents, have signed the objection which was submitted on Tuesday to An Bórd Pleanála. In Leinster House that afternoon the Save Moore St. Campaign, including relatives of the 1916 leaders, made a presentation for Oireachtas members. The event was hosted by Deputies Maureen O’Sullivan and Caoimhghín Ó Caoláin.
In the course of their objection the 25 TDs and Senators state:
“It is our belief that the revised plans to develop the Carlton Site constitute an unwarranted and damaging encroachment onto the National Monument at 14 to 17 Moore Street. If allowed to proceed this development would irrevocably alter the character of the modern historic centre of Dublin and to a large extent obliterate the most important battlefield site of 20th century Ireland.
“The Applicants have shown no regard for the status and significance of this historic site. Their proposal denigrates the monument. We need hardly remind An Bord Pleanála that the key concept in regeneration is sustainable development. Moore Street and its environs should be redeveloped, utilising backland development architectural principles as implemented successfully in other European cities. By 2016 when the world will focus on the centenary of the Rising, the development of this historic area should be completed on the basis of a sensitive and sympathetic plan.”
Following the Leinster House visit, Sinn Féin Dáil leader Caoimhghín Ó  Caoláin said: “The battle to save 14-17 Moore Street  is far from over. It  can still be won. As we approach the centenary of the 1916 Rising we owe it to the memory of those who died, to the present generation and to our children to fully preserve this site which is hugely important not only  for Ireland’s heritage but on an international scale also.”