There can be no preconditions 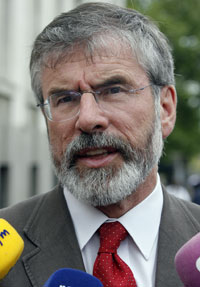 Writing in his online blog on 21 January, Sinn Féin President GERRY ADAMS addressed the ongoing impasse in the talks process

Apparently the DUP were sitting up at Stormont Castle on Thursday waiting for the Shinners to come and talk to them. Strange. This Blog had told Peter Robinson late the evening before that that phase of our discussions was over. I told him there would be a Sinn Féin national officer board meeting on Thursday and a report from Martin McGuinness on the negotiations would be discussed.
The failure of the DUP thus far to come up to the plate during the current round of negotiations shouldn’t come as any great surprise.
The DUP are looking over their shoulder at Jim Allister and then there are the ‘secret’ talks between the UUs and the DUP and talk of electoral pacts. That’s their own business and nothing to get too excited about. Except to note they told us they couldn’t do any business on the Sabbath - the very day they were busy on unionist unity business.
But lest we forget the DUP was born out of the anti civil rights politics of the late 60s and the firebrand unionism of the 19th and early 20th centuries that is rooted in sectarianism and a belief that Catholics are the problem – and the enemy. Hence the desire by some unionists, best exemplified by the Traditional Unionist Voice, not to have a Catholic about the place.
For this brand of unionism every compromise is a defeat; every conversation with a Shinner is weakness; every concession must be the last.
For these unionists and even others less hardline shaking hands or passing the time of day is too much. You wouldn’t believe the number of times this Blog has been alone in a lift at Parliament Buildings only for unionists to refuse to enter. Many a time this Blog has been tempted to stay in the lift as it goes up and down several times just to see what would happen!
Even their slightly less straight-jacketed colleagues think that just talking to a Shinner is a concession we should be really pleased and excited to receive.
Now let me be clear. Not every DUP’er behaves like this. In private many of them are relaxed and friendly. Maybe not great company in a pub but cordial nonetheless, pardon the pun.
The fact is that people are shaped by the political conditions in which they live. Underlying the politics of unionism is the effect of centuries of colonialism and of partition and a determination to maintain their status as top dog. They know the game is up. But it’s not over. So delay, delay, delay is the game plan.
This means that so far no unionist leader has acknowledged the role of the orange state and of unionism in creating the conditions for conflict. For them it’s everyone else’s fault, but especially the republicans!
Partition gave unionists a little Orange State. The glue that held it together was the Orange Order and other ‘loyal institutions’.
Even today most unionist politicians are in one or other of the loyal orders and those that aren’t listen attentively to what the Orange wants. And what is that in 2010?
They want the scrapping of the Parades Commission and progress on the ground – in other words marches through Catholic areas.
It’s sad that even now sectarianism and triumphalism still has such a huge grip on a large section of the unionist psyche. The orange card, played so often in the past to get their own way, is being played again as the DUP try to get the Orange Order what the Orange Order wants.
Sorry folks – it doesn’t work like that anymore. Those days are gone. The orange state is gone. The remnants remain and its legacy of institutionalised bigotry will take a long time to eradicate but change has taken place and the clock is not for going backwards.
The power sharing institutions have demonstrated their capacity to work, make local government more accountable and accessible and change people’s lives for the better.
But no one should underestimate the determination of unionism, allied to the political system – the so-called permanent government – which is still mainly unionist at its most senior levels – to prevaricate and stall and delay. To oppose change.
So, where are we now? There has been no product thus far as a result of the negotiations.
The Ard Chomahirle meets tomorrow and will hear a report on all this. The time has long passed for the transfer of powers on policing and justice. There can be no preconditions to that. Not on the Parades Commission; not on marches; not on equality and partnership government.