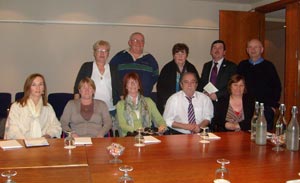 The RELATIVES of 11 civilians killed by the Parachute Regiment in Ballymurphy, Belfast, between 9-11 August 1971, emerged from a meeting with the Victims Commission on Tuesday night feeling “let down, insulted and dismissed”.
The families, accompanied by Relatives for Justice, local representatives from the SDLP and Sinn Féin, had met with Brendan McAllister and Mike Nesbitt to hear what they will do to support these families.
At the meeting, however, the families were told that the Victims Commission could not support them unless they co-operated with the state-run Historical Enquiries Team (HET). This is despite the clearly articulated position of the families to the commission, in a previous meeting on 8 September, when they told of their lack of faith in the HET investigation process. This is based on the HET being part of the British state, which is responsible for the deaths and the subsequent cover-ups, and the experiences of three of the families who initially engaged with the HET, which failed to deliver anything other than a mirrored report of the initial Royal Military Police findings.
The families’ firm position is that the HET is not an appropriate vehicle to examine these killings not least because of their lack of independence and the bad faith they have previously shown.
The families requested that the Commission acknowledge their experience and support their calls for an international, independent investigation, (as distinct from an inquiry) a statement of acknowledgement of the innocence of all victims by the British government and a subsequent apology from the British Government.
It also emerged at Tuesday’s meeting that the Victims Commission, through Brendan McAllister, had begun engaging with the HET regarding these killings, despite having neither the authority nor mandate to do so.
The families outlined clearly the reasons why this cannot be an option for them. They highlighted that as victims of state violence their Article 2 rights justified this position.
The families pointed to the Commission’s support for an inquiry into the Omagh bombing, but Brendan McAllister stated that the Ballymurphy families were not entitled to this same support as theirs is a so-called legacy case, whereas the Omagh bombing occurred in 1998. He stated that the families were at a fork in the road and must follow the HET process. He further stated that there would be nothing else on offer for the families.
These families feel let down, insulted and dismissed. They believe it is because they are victims of state violence. They feel that tonight the Victims Commission is now part of the problem, shoe horning victims rather than listening to them and supporting them.
The Victims Commission was put in place at huge costs to the pubic purse to act in interests of victims and give them a voice and to provide support. In this instance the Commission has not acted in the interest of victims but rather has undermined families and acted in the interest of the organisations responsible for the killings.
This brings the Commission into disrepute. Its modus operandi and its overall integrity are now in question.
The families were further told that the Victims Commission would not issue a statement supporting their call for an independent investigation into the killings.
Speaking on behalf of the families, Carmel Quinn, sister of John Laverty stated:
“We just aren’t the right type of victims. The Victim Commission should be supporting victims acknowledging when processes are inappropriate and inadequate. They should be walking with families by their side, not undermining them. We have met every political party and the British and Irish governments concerning this case. There is no doubt that there is a concerted effort by the PSNI/HET and the NIO to thwart any forward movement of this case. It is evident after tonight’s meeting that the Victims Commission, and in particular Brendan McAllister, are now part of that agenda.”