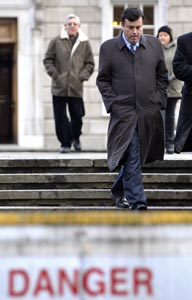 What is with Ireland that when it comes to regulating business and politics we can’t do the simplest things?
For some reason we can’t be like Britain, where bank chief executives can be questioned before a House of Commons Select Committee, in public, live on TV about their role in the economic collapse, their obscene salaries and lavish bonuses.
We also cannot be like the United States where Wall Street’s top bankers have been appearing before the Financial Crisis Inquiry Commission just two weeks ago. They even had to take an oath before giving testimony.
We definitely cannot be like Sweden, where not only did they nationalise nearly all the collapsing banks who had unsustainable property loans in the 1990s, but they have now begun to tax all banks to pay into a stability fund in case of future crises. The stability fee introduced in December 2009 is a direct tax on banks paid annually until the fund reaches 2.5% of Gross Domestic Product, which they estimate will take 15 years.

Ireland’s culture of secrecy
In Ireland we have a culture of secrecy and lies, which is why this week, only days after the ‘greenwash’ of a banking inquiry from the coalition government was proposed, we are heading into another possible banking crisis with the taxpayer once again picking up the tab.
Within the next three weeks, the first loans and assets will be transferred from ailing commercial banks to NAMA. Neither the Minister for Finance, the government or even the officials have been very forthcoming on the actuality of what will happen next; the most recent news on the NAMA website is from 26 November 2009.
Media reports suggest that loans from the ten largest developers totalling  €17 billion will be transferred to NAMA, with attention focused on what the writedown will be from their book value.
This means that €17 billion was lent to developers, but what do NAMA think the assets are worth now? There is, as with every aspect of the financial crisis in Ireland, another problem. Some developers got multiple loans for the same properties and development sites, so though we know which bank lent billions to which developers, we don’t know who actually has the rights to the assets.
Last week in the High Court Justice Peter Kelly was focusing on a €550 million loan to bankrupt property developer Liam Carroll. AIB had handed over the money with only a letter from Carroll and the title deeds as security.
Kelly said it was “astonishing” and “extraordinary” that AIB had given over so much  money without checking whether other loans had been taken out on the property.

Fraudulent valuations
In a separate disclosure, another problem with the NAMA loans is how the properties against which money was borrowed were valued. In many cases banks accepted the valuation put on lands by borrowers without getting their own estimates.
In Britain the Serious Fraud Office has been investigating an alleged fraud where AIB had supposedly accepted phony documentation for commercial loans.
Another allegation about Irish banking practices was that some Irish banks would give loans on land based on the final value of the finished building projects, which meant that the developers would need property prices to rise in the period between getting a loan, building a development and selling the houses, shops or whatever they had constructed.
In the last years of the boom these businesses were on a knife edge but kept on borrowing and building and banks kept on lending.
The scale of the havoc brought about by this lending can be shown in the comparison of the cutbacks in spending in last December’s budget, where €4 billion was cut from government spending, while two developers, Liam Carroll and Bernard McNamara, owe €4.5 billion between them. We are literally paying for their mistakes.

Censoring the media
Last February in An Phoblacht we profiled how McNamara had in 2008 pulled out of the redevelopment of five corporation sites in Dublin. He had been the successful bidder on these Public Private Partnerships, promising to invest €900 million and build 1,800 homes on key sites north and south of the Liffey.
Bizarre secrecy in Dublin City Council meant that it was unknown for a considerable time that McNamara had been the proposed developer on so many key sites, where there was no building during the boom and no chance of it during the recession, leaving these economically marginalised and deprived communities condemned to another decade of substandard housing.
Other strange secrets regarding the banking crisis were revealed this week when a judgement from the Information Commissioner Emily O’Reilly declared that the public would never know what happened on the night of 28 September 2008, when the chief executives of the then largest Irish banks met with the cabinet and convinced Brian Lenihan and Brian Cowen to commit over €400 billion to underwrite bank deposits.
Bizarrely, there were only two handwritten notes of the meeting at which so much cash was committed. The Department of Finance has resisted releasing any of the documentation underpinning the 2008 bank guarantee, so the reticence to have a transparent banking inquiry stems not just from the banking executives but also from the heart of the government.

Double jobbing bank managers
Maybe the lack of regulation in the banking sector is another reason for not having a detailed inquiry into the Irish banking sector. Only this week the financial regulator announced that it was to carry out a review of conflicts of interest where bank employees borrow from the banks they work for.
The personal loans of the directors of Anglo Irish Bank, hidden from their own shareholders, ran into hundreds of millions of euro. The loans of Sean Fitzpatrick, the former CEO of Anglo Irish Bank, totalled €122 million.
In November it was revealed that two AIB managers in Dublin and Galway were also moonlighting as property developers.
The culture of secrecy, the lack of regulation and the absence of any real oversight of Irish banking practices stands in stark contrast to the last week in the United States, where Barack Obama announced plans to introduce legislation that will prevent retail banks speculating with bank deposits in hedge funds, currency markets and other financial services sectors.
Obama’s assertion that he didn’t want the U.S. economy held hostage by banks that were too big to fail stands in stark contrast to Ireland, where jobs, taxes, health services, education and housing are being held hostage to pay off bank debts.
We don’t know if the Swedish, British or U.S. models will provide a solution to the banking crisis. We do know that in Ireland there is clearly not even a modicum of political will to face up to any criticism or questioning of how banking executives, politicians or regulators have performed over the last two decades.
For now some have taken a step forward, while in the next three weeks, shrouded in unnecessary secrecy, NAMA will be taking our economy a few more steps backwards.

BRIAN COWEN: Not a modicum of political will to face up to criticism