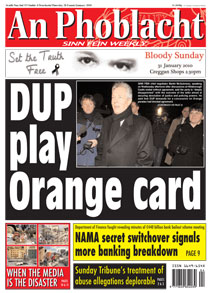 Sinn Féin chief negotiator Martin McGuinness, speaking on Wednesday afternoon after discussions at Hillsborough Castle ended without agreement, said the party is "deeply disappointed" with the outcome of the talks aimed at securing devolution of justice and policing powers. He said that DUP demands for a concession on Orange parades had blocked agreement.

“The two governments in their statement make it clear that what is required is implementation of the Good Friday and St. Andrews agreements,” he said. “We welcome this.
“We went into these negotiations against the backdrop of the three years of default by the DUP in relation to their St. Andrews Agreement commitments. However belated, this still requires an early date for the transfer of policing and justice powers and a situation where the institutions deliver and operate, into the future, on the basis of partnership and equality.
“The reality is that the failure to resolve those problems does not lie with Sinn Féin. We have come at this phase in a problem-solving mode; we have invested much in the success of these institutions and so we want them to succeed.
“We have displayed extraordinary patience over the past 18 months. We sought to persuade the DUP to be partners on progress. In recent days the two governments have joined that effort.
“The decision by the DUP, at the behest of the Orange Order, to make the abolition of the Parades Commission a precondition for the transfer of powers flies in the face of that. It made reaching an agreement extremely difficult and many are speculating that this was the intention.
“However, I have to say that despite some progress being made on policing, we have not concluded a deal here today. I am deeply disappointed and I informed the plenary of that; Gerry Adams and myself in a meeting with the Taoiseach and British Prime Minister did likewise.
“We now intend to study the governments’ statement, but one thing is certain, that citizens’ rights and entitlements cannot and will not be subject to a unionist veto or an Orange Order precondition.”
Sinn Féin was reacting after British Prime Minister Gordon Brown and Taoiseach Brian Cowen left Hillsborough after failing to broker agreement on the devolution of policing and justice powers to the power-sharing administration.
Speaking from Hillsborough before his departure, Brown said it was feasible for proposals on devolution and justice and policing to be voted on by the beginning of March, ahead of a possible transfer of powers in the beginning of May. Speaking alongside Cowen, Brown claimed the three days of intensive negotiations between the main parties had seen progress made, but he said the party leaders had now been given 48 hours, until Friday, to try to hammer out a deal.
If they fail to do so, Brown said, the two governments would publish their own plans for moving the process forward.
Brown said: “We believe we have proposals that make for a reasonable deal on devolution of policing and justice, we believe we have proposals that make for a reasonable settlement on all the outstanding issues.”
But he added in regard to the 48-hour deadline: “If we judge that insubstantial progress has been made we will publish our own proposals.”