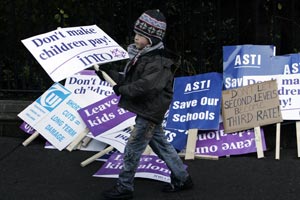 Budget 2010 saw yet another attack on one of our most vital public services, education, and in so doing has again foisted most of the burden on disadvantaged and vulnerable students.
This is not the first time such a savage budget was imposed on the education sector, with previous budgets resulting in higher class sizes, increased third-level registration fees, axing of special needs classes and cuts to schools in the most disadvantaged areas in the 26 Counties.
This time round the school building budget has again been cut, despite the dire circumstances in which many schools find themselves. Third-level grants have also been slashed, which will affect thousands of grant recipients.
An overall cut of just over 5% will be administered by the Minister for Education and Science Batt O’Keeffe this year.
Our education system is already chronically underfunded. Indeed, proper investment was never made even when the money was there. Because of this the 26-County education system ranks bottom of the barrel in the EU in terms of funding with one of the highest class sizes in Europe.

School buildings
Yet again, despite workers crying out for jobs in the construction industry, the government has failed abysmally to invest in a proper school buildings programme and instead shockingly has opted to cut the fund for new school buildings and repairs by a staggering 27%. Across the state schools are desperate for new buildings as well as vital repairs to old ones. They are not being listened to. Children are spending their school days in prefabs which in some cases pose a serious risk to their health as well as greatly affecting the quality of the education they receive.

Special education
A cut of 4% will be made to special education initiatives in primary schools as well as a 21% chop to the National Council for Special Education. These cuts will affect some of the most vulnerable schoolchildren – those with special needs. Already we have seen closures of special needs classes across the state, we now learn that up to 1,200 special needs assistants will be let go this year. This will have a huge and devastating affect on young vulnerable children who deserve an education as much as any other.

Third level
Budget 2010 implements a series of savage cuts to the third-level sector. This makes a mockery of the so-called ‘knowledge economy’, which the government purports to support and is particularly insulting to students considering the excessive salaries of university heads, which is just €4,000 short of what a government minister earns, plus expenses.
Budget 2010 introduces measures for an overall reduction of 4% in provision for institutes of technology and universities. This will see students having to deal with diminished practical and tutorial supports, shorter library opening hours, overcrowded lecture halls and limited access to labs. The recent fiasco in Dublin Institute of Technology whereby labs were cancelled, student services were severely curtailed and libraries services cut shows just how badly an effect a cut like this will have.
The Budget also introduces a 5% cut to the Student Maintenance Grant.
This will come into effect immediately and will affect new and existing grantholders. It is estimated that around 60,000 students per year avail of this grant. With the cost of going to college for a year estimated at being anywhere in the region of €7,000 to €8,000, this will mean that thousands of students literally wont be able to afford to go on to higher education and will end up on the dole queues.

Targeting the disadvantaged:
As has been the general theme throughout the lifetime of this government as far as cuts are concerned, it is the least well off who are the biggest target and this has been maintained in this year’s education budget.
The Millennium Partnership Fund, which provides financial assistance for further and higher education students who are experiencing financial difficulties while attending college, has through Budget 2010 been discontinued. A student applies to this fund to help them with either temporary or ongoing financial difficulties and it has been a lifeline for many third-level students struggling to get by. The discontinuation of this important scheme will result in many pupils from disadvantaged backgrounds being unable to carry on with their studies.
Budget 2010 makes for the removal of eligibility for student support grants for those in receipt of the Back to Education Allowance and Vocational Training Schemes allowances. Far from encouraging young people who are out of work to take up training schemes this measure effectively makes it so that if young people do take up training they will lose all their money. This is a nonsensical measure and will penalise, not encourage, young people to take up training courses. As well as this, allowances to participants in Vocational Training Schemes, Youthreach and Senior Travellers Training Centres will also be reduced.

Other cuts to education implemented in Budget 2010

CUT: The government has failed abysmally to invest in a proper school buildings programme