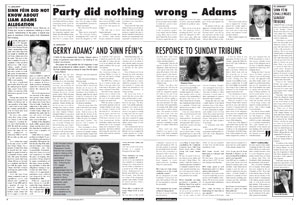 Sinn Féin did not know about Liam Adams allegation

Sinn Féin Chairperson Declan Kearney on Friday last issued a statement relating to Liam Adams’ membership of the party. A report was given to members of the party’s Ard Chomhairle that morning.

"In the aftermath of the UTV ‘Insight’ programme, Sinn Féin acknowledged Liam Adams’ membership of the party. Since then Sinn Féin has sought to establish the role Liam Adams played in the party. This process has taken a number of weeks to complete. It has involved discussions with Gerry Adams, party leaders nationally and party members and a review of available party documentation. The fact is that information from this period in the 1990s is not complete.
We have established that Louth Sinn Féin and the national party leadership, apart from Gerry Adams, was unaware of the allegation against Liam Adams.
During this period the allegation against Liam Adams was known only to some members of his family and social services in the Six Counties and the RUC, both of whom had been informed in 1987.
We have also established that Liam Adams was Chair of the Louth Comhairle Ceantair for two and a half months in 1996. He held the position of secretary for one month before this time. He was also nominated as Education Officer but he did not take up this position.
Gerry Adams has stated he became aware in 1997 that Liam Adams was a member of Sinn Féin when he heard that his name might be going forward as a potential election candidate. The party President moved to ensure that Liam Adams did not go forward as a candidate and that he later left the party. Gerry Adams did this without involving the party locally or nationally.
After this time Liam Adams continued to mix in republican circles and attend some republican events. From 2000 and for a number of years he involved himself in localised party work in Belfast. Liam Adams did not re-apply to join the party as would be required by party procedures. He held a number of positions in a cumann in Lower Andersonstown, including chair for a short period before the cumann dissolved.
The local organisation was unaware of the allegation against Liam Adams and the circumstances of his departure from Sinn Féin in Louth. Clearly his admission to the party in Belfast should have been avoided. Gerry Adams has informed the party that he was not aware of Liam Adams involvement in party work at this time.
In light of the allegation made public against Liam Adams and the above facts, it is clear that he should not have been a member of Sinn Féin.
Child abuse is a major problem in Ireland. No sector of Irish society has been untouched. Throughout the last decade Sinn Féin rules and procedures governing recruitment and the responsibility of membership have been reviewed and regularised. In 2000 the party, in keeping with procedures being adopted by many organisations at that time, began introducing guidelines to deal with allegations relating to any sexual and child abuse. A robust set of appropriate guidelines were codified and adopted by the Ard Chomhairle in 2006.
Political opponents have chosen to cynically exploit this tragic situation for wholly political ends. This is disgraceful. They will not succeed."

Party did nothing wrong – Adams

Prior to the weekend the ‘Sunday Tribune’ sent a series of questions (see below) to me relating to my brother Liam Adams.
The paper did not publish the full response it was given but produced an edited version. I think it only fair that readers have a chance to read the full piece. – Gerry Adams

Over the last number of weeks Sinn Féin Chairperson Declan Kearney has compiled a report relating to the nature and duration of Liam Adams’ membership of Sinn Féin.  Following the UTV ‘Insight’ programme we acknowledged that he had been a member of the party.  Having spoken to Gerry Adams, national party leadership, party members and examining available documentation we have established the following facts.

When did Liam Adams join Sinn Féin?
The first record of his membership is a cumann in Donegal in the mid 1980s.

What cumainn was Liam Adams a member of?
As far as we can establish he was a member of a cumann in Donegal for a short period in the mid 1980s, in Dundalk for a period in the 1990s and in Lower Andersonstown in Belfast from 2000 for a number of years.  Sinn Féin was not aware of the allegations against Liam Adams. Clearly, he should not have been a member of the party.

What officer positions did Liam Adams hold in Sinn Féin?
He was chair of the Louth Comhairle Ceantair for two and a half months in 1996.  He held the position of secretary for one month before this time.  He was also nominated as Education Officer but he did not take up this position.  He held a number of positions in a local cumann in Lower Andersonstown including Chair for a short period.

How long was Liam Adams chairperson of the Louth comhairle ceantair?
He was chairperson of Louth Comhairle Ceantair for two and a half months in 1996 and he was appointed as secretary for one month.

Who nominated and seconded him for that position?
We have no record containing this information
According to Sinn Féin’s constitution, the Comhairle Ceantair liaise with Sinn Féin’s head office. With whom did Liam Adams liaise?
We have no record of any contact between Liam Adams and the party’s Head Office. The reality is that this function is normally performed on behalf of a Comhairle Ceantair by the relevant regional leadership structure overseeing local executives. Liam Adams was also only in this position for two months.

Before Dundalk, was Liam previously a member of Dublin Sinn Féin and/or associate with party members in Dublin?
As far as we can establish he lived in Dublin for a year or two in the early to mid 1980s. He was not a member of Sinn Féin but did attend republican events.

Did Liam attend ard fheiseanna as a delegate and if so when?
We don’t know.  Party records only go back to 1997. He was not a delegate after that date.

Did Liam speak at ard fheiseanna and if so when and on what subjects?
Head Office only retains records of keynote leadership speeches and key Ard Chomhlaire contributions. We do not keep records of  each individual contributions at Ard Fheiseanna.

Was Liam involved in fundraising for Sinn Féin in any capacity?
He was Treasurer of the Lower Andersonstown cumann for a period and was a joint signatory on the cumann’s cheque book.

After Liam moved from Dundalk to Belfast, was he active in Sinn Féin in Belfast, and if so in what role?
From 2000 and for a number of years Liam Adams involved himself in localised party work in Belfast.  Liam Adams did not reapply to join the party as would be required by party procedures.  He held a number of positions in a cumann in Lower Andersonstown, including chair, treasurer and other subsidiary roles for short periods.

Was Liam ever in Leinster House as a guest of a Sinn Féin politician?
We have no record of any such visits

Party guidelines
You have accused Gerry Adams of breaking the Sinn Féin constitution which you claim states when a member becomes aware of sexual allegations against another member they are bound to inform Sinn Féin Ard Chomhairle whilst maintaining the anonynimity of the accused.
This is not in the Constitution nor is it accurate. Robust guidelines were adopted by the Ard Chomhairle in 2006.  These make it clear that the nature of the allegations and the identity of the accused should be communicated to the statutory agencies immediately  as  well as the relevant party structure.  If the accused is a Party member, he/she is immediately suspended without prejudice by the National Party Chair pending the conclusion of the appropriate statutory investigations.