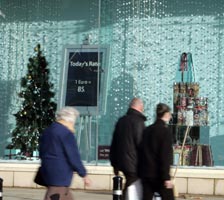 DOWNTURN: Overall the retail sector in the North has stagnated in 2009 despite the phenomenon of cross-border shoppers

The recession in the Six-County economy will end this year, as a series of economic forecasts predict growth rates of up to 1.2% for 2010, but a 22-month decline in business staffing levels is set to continue, and another 7,500 workers will be signing on the dole as job losses continue during the year. This is the stark reality in the North of a recession that will be ‘technically’ over this year.
In previous decades such has been the lot of the Six-County economy, bound to not just the Westminster taxation and spending decisions but also to the vagaries of sterling’s exchange rate movements and the Bank of England exchange and interest rate policies.
This Assembly has only begun the task of forging a new economic reality for the Six Counties within an island economy and its broader British, European and international realities. Now, as the international economy refocuses its strategies and policies, it is key that we avoid a repeat of past policy failures.
In the late 1980s and early 1990s, when the international economy stuttered, with growth rates falling and unemployment rising, the Six-County economy’s performance was not as bad in terms of business closures and unemployment rates as those that were recorded in Britain and the 26 Counties.
This does not mean there was less deprivation or hardship in the North at this time. In fact the decades of economic underdevelopment and the low paid workhouse economy, with ongoing emigration it created, have been well documented.
Worse still was that on the flip side, when economic growth accelerated in Ireland and then Britain in the late 1990s, the gap in economic performance in the Six Counties was huge. There was no Celtic Tiger economy in the Six Counties, though the worst excesses of overinflated property prices and speculative development have scarred this region also.
So in 2010 it is a sort of Groundhog Day for the Six-County economy, with business closures and rising unemployment in a time of recession and the prospect of an underperforming local economy in the years to come the best worst option available.
An overview of where the Six-County economy stands in 2010 highlights the true scale of the problems facing the economy and the potential to once and for all create an independent locally relevant economic future for the whole island economy.

Employment and Unemployment
The December 2009 Labour Market Report from the Department of Enterprise Trade and Investment in the North estimated the number of unemployed at 52,539 for November 2009, with an average unemployment figure of 54,000 from August to October. The jobless figure has risen 56% over the year with more than 18,000 new people signing on.
While the greater focus of the economic decline during the year was on construction, there were 8,400 jobs losses in the North’s manufacturing sector also.
A study by the Economic Research Institute of Northern Ireland published earlier this month estimates youth unemployment as having risen to 20%, nearly three times the Six-County unemployment rate of 6.6%.
Youth claimants, who are categorised as being under 25 make up 32.2% of all the North’s jobless, an increase of 106.3% in the year.
There were 760,000 people at work in the Six Counties between August and October 2009, up 13,000 on the second quarter of the year. However overall the workforce has decreased 25,000 in the year to date.

The business sector
There were 70,620 VAT registered businesses in the Six Counties in 2009, with the total number of enterprises estimated by the Department for Business Innovation and Skills to be at 126,640. The greater figure includes many small businesses whose turnover is too small for VAT registration. The  most recent figure is for 2008, and it had decreased 4.1% on the 2007 total.
Of the VAT registered businesses 44.5% had a turnover of less than £100,000 annually compared to 9.9% of VAT registered businesses having an annual turnover of greater than £1 million. 73.9% of Six-County businesses have between 0-4 employees with just 1.9% having more than 50 employees.
There are just 725 businesses operating in the North that come from outside the Six Counties. 35.4% are from the 26 Counties and are the greatest single group. The wholesale and retail industry accounted for the greatest section of this sector, with 32.7% of the total.
These figures demonstrate the core role played by small businesses in the North and signals the need for an enterprise strategy that will help these businesses grow, especially in the challenging economic environment predicted for 2010 and beyond.

Where is the development potential?
In some key areas the Six-County economy is at saturation point. A forecast published last week by CBRE property consultancy, which is based in Dublin and Belfast said it was “premature” to predict a property market rebound in 2010.
Land values in the North had declined by up to 60% from their peak values, and CBRE predicted low turnover in commercial property because of “no current signs of significant inward investment in the foreseeable future”. The hotel sector is “saturated” and there is “little prospect” of significant new developments other than those ongoing at the moment.
The retail sector commands most economic comment currently focused on the Six-County economy, particularly the phenomenon of cross-border shoppers coming north. Overall the retail sector in the North has stagnated in 2009 and in the context of cross-border shopping the real winners are the British and Irish multiples that sell both sides of the border and have used, particularly in the case of Tesco, the price competition as a means to take Irish goods off the shelves north and south.
An Ulster Bank analysis published in early January showed that across the Six Counties the retail sector experienced a downturn and that the sector “showed the sharpest fall in activity across all economic sectors in December”.
There is, though, one key factor, that is indigenous business. 5,690 new businesses were started in the Six Counties in 2008, 4,405 failed or were shut down. This is a key measure of the real pulse of the economy.
Locally owned business growth and expansion must be facilitated, yet last week Royal Bank of Scotland, 84% owned by the British taxpayer, announced that its £1 billion finance fund for  manufacturing would not apply to the Six Counties.
Ulster Bank is the face of RBS in Ireland and claims that a £250 million regional fund launched in 2009 will provide for funding local manufacturing. It smacks of a double standard and hits to the heart of the economic malaise in the Six Counties, ignored by Britain and not looking to the 26 Counties enough for real economic integration.
Tangible economic sovereignty at the local level throughout the island is the key to a longterm path out of the current recession. We need an economy that grows local business, taps the potential of all our youth and provides real value, not just short-term profits for multinational retailers.

Average unemployment  from August to October

Rise in unemployment in 2009

Percentage of total unemployed who are under 25

Increase in under 25 unemployment in 2009

Prediction for increase in unemployment in 2010

Number of people at work in the Six Counties, down 25,000 on the year

Number of businesses in the Six County economy

Number of businesses operating in the North that are inward investors

Percentage of the inward investors from the 26 Counties.

Decline in land values from peak

Number of new businesses started in 2008