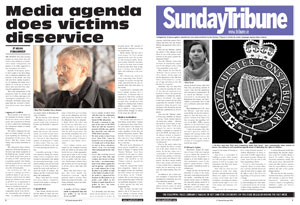 The women who have recently spoken out about abuse they suffered in their childhood or adolescence acted courageously and deserve to be fully supported as they seek justice and closure.
Sections of the media, however, have sought to use these allegations to demonise republican communities in the North, and Sinn Féin and Gerry Adams in particular, by claiming that there was a culture of ‘cover-up’ in cases of abuse and rape that was sanctioned by republican leaders.
This crude manipulation of the allegations made by victims and survivors of abuse and rape is not ‘investigative journalism’; it’s a politically motivated smear campaign that has resorted to distortions and in some cases outright lies.

Legacy of conflict
These sections of the media are not interested in having a serious discussion about sexual abuse, assault and exploitation in Ireland or about collectively challenging the widespread culture of silence surrounding it.
The media campaign has singled out Gerry Adams for criticism regarding his handling of allegations by his niece, Áine Tyrell, that her father, Liam Adams, had sexually abused her as a child.
The allegations have demonstrated how distorted all aspects of life have been under occupation in the North. In any ‘normal’ society, Áine Tyrell would have gone to the police in 1987, launched legal proceedings against Liam Adams, testified against him in court and then watched as he was sentenced and jailed, if found guilty.
But in Belfast in 1987, the account of a teenage girl from a republican family of rape and sexual abuse carried out by her father during her childhood was viewed by the RUC as an opportunity to try to press her mother for information on republican activities.
The RUC and then PSNI have completely failed Áine Tyrell - and, undoubtedly, other victims of abuse – by putting an anti-republican agenda ahead of defending the rights of children.
The fact that the police allowed Liam Adams to go on to work in several youth work positions in Belfast and Dundalk is unjustifiable.
The culture of concealment, shame and secrecy that unfortunately surrounds sexual abuse means that victims and families are reluctant to raise allegations publicly, in distinction to victims of other crimes. This was compounded in the North by the lack of a civic policing and justice system.
Generally speaking, if there were instances during the conflict where abuse allegations were referred to individuals who lacked the necessary knowledge, skills, understanding and professional training as to how allegations should be dealt with and how to meet the needs of victims, the chances are they would have been dealt with inadequately.
These facts and the context have been almost completely ignored in the media’s coverage of recent abuse allegations.

In good faith
Liam Adams should not have had the chance to carry out community work with young people or been a Sinn Féin activist when such serious allegations had been made against him. But the fact that the allegations were not adequately dealt with by the police and Social Services when they were initially raised, or at any point since then, has not only meant that Áine has still not got justice, but also that the individuals who were aware of the allegations were placed in the position of having to respond to Liam Adams’ movements.
Gerry Adams’ actions were shaped by the dilemma resulting from the failure by the police and Social Services to take appropriate action and in light of the fact that Áine had not until recently decided to go public with the allegations. Professionals advised Gerry that an abuse survivor has the right to privacy and to take their own decisions.
Those who have tried to suggest that Gerry Adams was involved in a ‘cover-up’ – that he actively tried to silence Áine Tyrell and protect his brother – are being extremely cynical and deliberately misleading.

It is absolutely clear that these actions do not amount to a cover-up or an attempt to protect an alleged abuser. No amount of media slander claiming a cover-up can manufacture one.
Media slander will also fail to erode respect for Gerry Adams support for his niece, for his honest and courageous public discussion of abuse within his own family, and for the many years of work he and his party have done in support of women and children’s rights and wellbeing in the community.
This discussion should be about supporting Áine Tyrell’s struggle for justice though the courts, and about how we can collectively deal with child abuse in our society.
If people have a problem with Gerry Adams because he’s a republican, or because they’re opposed to Sinn Féin’s political strategy for achieving a united Ireland, they should have the integrity to challenge him on these political grounds – instead of trying to exploit a young woman’s painful public struggle for justice for the abuse she suffered.

Media’s motivation
All victims and survivors of child abuse, sexual abuse, violence or exploitation have Sinn Féin’s full and unequivocal support in pursuing justice through the courts, regardless of who they are making allegations against. That includes victims of perpetrators who may have been republican activists, and Sinn Féin has made this crystal clear.
The most recent allegations of abuse against republicans, published on Sunday 17 January in the ‘Sunday Tribune’, have been exploited by the paper to further its smear campaign against Gerry Adams. The headline of the ‘Tribune’ claims he ‘ignored two more rape victims’.
Gerry has categorically refuted these allegations.  Indeed one of the alleged victims has confirmed that Gerry Adams was never told of the abuse, as the ‘Tribune’ claimed. She is now taking legal action against the paper which she says published allegations of sexual abuse against her will and manipulated her.
The ‘Tribune’ recently published a list of 25 questions for Gerry Adams to answer which were responded to. In light of its ongoing witch-hunt against Gerry Adams and Sinn Féin, the Sunday Tribune has questions of its own to answer.
Why did the ‘Tribune’ publish the details of the alleged sexual abuse of one of the women interviewed by the paper against her expressed wishes?
Does the ‘Tribune’ believe this has been an empowering experience for this alleged victim, or that it has assisted her in any way?
Why, despite the fact that the ‘Tribune’ was in contact with Gerry Adams, did the paper not  put the allegations of his, and Sinn Féin’s, involvement in a ‘cover-up’ of rape and abuse to him and ask him for a response?
Similarly, why was Sinn Féin not contacted regarding the status of the elected representative accused of abuse and given the opportunity to outline the circumstances involved? The paper would have learned that the party suspended the member without prejudice when the party was informed of the allegations and the PSNI had commenced an investigation.
How does the ‘Tribune’ justify its front-page headline on Sunday – saying ‘Gerry Adams ignores two more rape victims’ – when he has acted in several ways to support his niece Áine Tyrell in her struggle for justice, including making a statement in support of her to the PSNI, and when one of the alleged victims in Sunday’s paper says she told the paper Gerry had not been informed of the allegations?
How do the media outlets that have claimed that Gerry’s revelation of the abuse within his own family by his late father was a ‘cynical ploy’ to ‘divert attention’ from his niece justify or substantiate this callous and offensive allegation? Do these media outlets believe that victims and survivors of abuse within Gerry’s immediate family are less deserving of support and understanding than others?
In addition to all of these specific examples of inaccurate and unscrupulous journalism are even more important questions.
Does the ‘Tribune’, and other media, believe cases of child abuse and rape have happened among political parties other than Sinn Féin, and among sections of society other than the republican and nationalist communities? If so, and if the ‘Tribune’ is only interested in ‘investigating’ the Republican Movement, and Gerry Adams in particular, how is that not a politically motivated witch-hunt?
Most fundamental of all – does the ‘Tribune’, and other media, acknowledge the fact that statutory agencies have the legal duty to protect children from abuse? Do they recognise that appalling failures by the RUC, PSNI to protect children in the North have been exposed by the recent allegations?
If they do recognise this, why are these agencies, which are charged with carrying out this vital function but failed to do so, not being subjected to any level of scrutiny or investigation whatsoever by the media?

Children’s rights
Thankfully, despite the eagerness of some of the usual suspects to try to exploit this situation for political reasons, the people I’ve spoken to in west Belfast seem to have maintained a sense of perspective, partly because a witch-hunt against a republican leader is nothing new.
People can also see beyond the headlines to some of the issues that aren’t even being discussed by the media – including the widespread sexual abuse of children, the long-term trauma caused by it and the culture of secrecy surrounding it, as well as, of course, the distortions and problems caused by the nature of policing in the North.
Sinn Féin is committed to building a society where women are full and equal members in practice as well as on paper, and understands that this work begins within the party itself.
Sinn Féin has done massive amounts of work over many decades to defend and advance the democratic rights of women in society, in the home and in the workplace, including the fundamental human right to live free from sexual and domestic violence.
Right now, the women who have come forward recently to outline allegations of abuse or rape must be fully supported in their pursuit of justice through the courts. Sinn Féin has said it will fully support these efforts.
Ireland is only beginning to break the silence on sexual abuse and a serious national discussion must be had about its impact and the fight to stop it. But this is not happening in the present media coverage.
A serious discussion would start by acknowledging that child abuse is experienced across all sections of Irish society regardless of class, religion or political background.
A serious discussion would also acknowledge the specific experience in the Six Counties during a period of conflict, where the nationalist community widely, and with good reason, distrusted the police and other statutory agencies with the responsibility to protect children and take action against alleged abusers.
The state has the duty to protect children from abuse, and Sinn Féin will continue to push for further legislation, education and resources aimed at strengthening children’s rights and welfare throughout Ireland.