Banking on an inquiry that pays off for the public 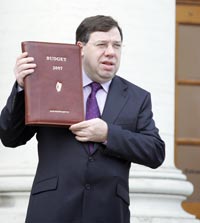 Brian Cowen: Finance Minister for much of the last decade