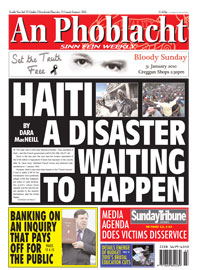 In the latter half of 2003 Jean Bertrand Aristide – then president of Haiti – sent the French government a bill for $21,685,135,571.48.
Down to the last cent, the sum was the modern equivalent of the $150 million in reparations France had imposed on the country after its ‘slave army’ defeated French forces and declared independence on 1 January 1804.
However, while it may have been based on the ‘French ransom’, it was in reality a bill for the immiseration and systematic pillage of the first independent nation in Latin America, the world’s oldest black republic and the second oldest republic in the western hemisphere, after the United States.
Haiti was the only nation in which independence had been achieved as a result of a slave rebellion, under leaders such as Toussaint L’Ouverture. Their successful revolt had been inspired by a similar undertaking in Paris, in 1789.
That centuries-long process of immiseration and degradation was finally brought to its logical conclusion on Tuesday, 12 January 2009. How can there be such surprise that so many have died, that the country was wholly unprepared and without any capacity to respond?
What more can be expected of a country where, in 2008 and 2009, it was reported that millions of its poorest citizens had been reduced to eating ‘cakes’ made from oil, water and mud. Fashioned by hand, the mud cakes were dried in the sun and sold. They supplied not even the pretence of nutrition and simply confirmed that here was a society that, literally, could fall no further.
Those reports were carried in mainstream media outlets across the Western World.  Is it any great shock that people who have been reduced to eating mud to survive would also inhabit homes that might collapse at the first trembling, or that in the aftermath they might have problems accessing water, food and healthcare? They couldn’t access them before the earthquake.
Haiti may be unfortunately located, on the fault line between two major tectonic plates. But it does not automatically follow that hundreds of thousands must die when an earthquake does strike, their bodies buried forever under rubble, or cast onto the street to swell and burst in the Caribbean sun.
History and the brutality of successive empires have conspired to do that. Nearby Cuba is also prone to natural disasters, but it is a rare occasion when Cuban lives are lost and never, ever on such a scale.


RUINOUS REPARATIONS
The reparations demanded by the French in 1804 were for the ‘loss’ of very lucrative plantations and estates that had, under French rule, produced some 60 percent of all the coffee and 40 percent of all the sugar consumed in Europe. Officially known as Saint Dominique and informally known as the Pearl of the Antilles, 18th century Haiti was perhaps the richest domain in the entire French empire.
But the $150 million reparations debt (later cut to $90 million) crippled the newly-independent nation before it had even learned to walk.
Indeed, Haiti only agreed to pay the reparations after having been effectively starved into submission by a trade embargo imposed by France – the former imperial master was determined that the Haitian ‘example’ would not infect the rest of the empire, determined that Haiti was seen to be punished.
The echoes with the modern era are uncanny: for Haiti read Nicaragua after the Sandinistas triumphed in 1979 when Reagan launched the Contra War; with Vietnam in 1975 or Cuba in 1959. The latter blockade still stands. Plus ça change!
Haiti struggled with the imposed payments and New York’s Lords of Finance saw their opportunity. The City Bank (Citibank) cut a deal with the government in Port au Prince: they paid off the French debt and Haiti took out a longer term loan with the bank. It proved as heavy a burden as the original bill and was not repaid until 1947.


UNFRIENDLY NEIGHBOUR
In the early years of the 20th century the debt owed to City Bank provided a pretext for direct U.S. involvement in Haitian affairs. Following a threatened default, President Woodrow Wilson sent in the Marines. The ‘adventure’ was organised by the then Secretary of State, William Jennings Bryan.
Displaying the typical imperial disregard for history, Secretary Bryan is reported to have exclaimed, upon arrival in the country: “Imagine, niggers speaking French!”
It is but a short step from there to the 2004 ousting of Jean Bertrand Aristide from the Presidential office - the second occasion on which the U.S. had either assisted or facilitated his removal. During his years in power Aristide had gone against the grain of Haitian history by improving health and education for the poor and doubling the minimum wage. That was his crime.
It is said that then US Ambassador to Haiti, James Foley, accompanied by CIA officials and US Marines, personally informed Aristide of his departure from office, in February 2004. He is currently in exile in South Africa.
His immediate return to Haiti is necessary - as is payment in full by Paris of the bill he posted in late 2003. And then Haiti should submit a massive reparations claim, to more than one country.
Over the coming weeks and months, the billions in aid that will arrive in Haiti – most of it well intentioned – will be but a fraction of what has already been plundered.