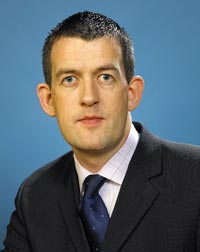 GOVERNMENT Minister Willie O’Dea has been forced to withdraw defamatory comments he made against Limerick City Sinn Féin Councillor and joint party Treasurer Maurice Quinlivan in the run-up to the local government elections last June.
In a newspaper interview last March Willie O’Dea made comments concerning Maurice Quinlivan which were untrue and he now withdraws the defamatory statement.
The defamatory claims followed criticism of the Fianna Fáil minister by Maurice Quinlivan over revelations that six civil servants were working on constituency matters for Mr O’Dea at a total cost to taxpayers of €165,000 to  €225,000.