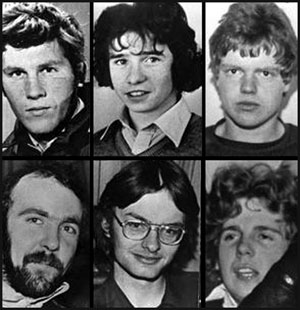 THE PSNI are stalling on disclosing the Stalker/Sampson reports into RUC ‘shoot to kill’ incidents until next year.
In 1982 six men were shot dead by crown forces in controversial circumstances in Armagh. They were IRA Volunteers Gervais McKerr, Eugene Toman and Seán Burns all from Lurgan, civilian Michael Tighe shot dead in a hayshed on the Ballinary Road outside Lurgan with his friend Martin McCauley who survived and INLA Volunteers, Seamus Grew and Roddy Carroll from Armagh City. The latter were killed on 12 December at the entrance to the Mullacreevie Park estate where Grew lived.
The killings became the focus of a shoot-to-kill investigation by British police officers John Stalker and Colin Sampson.
At a preliminary inquest hearing in Belfast on Monday, 30 November lawyers for PSNI Chief Matt Baggot, sought a further delay in handing over the Stalker/Sampson report  to Coroner John Leckey.
The PSNI legal team asked for the extension in order to prepare redactions and submit Public Interest Immunity Certificates, more commonly known as gagging orders, in respect of the Stalker/Sampson Reports into the 1982 shoot-to-kill operations carried out by the RUC in County Armagh.
And while the British government denied the existence of a ``shoot to kill’’ policy, unionists welcomed the existence of just such a policy.
Speaking to An Phoblacht Mark Thompson of Relatives for Justice outlined why it is in the interests of the British state to prevent the publication of Stalker/Sampson.
“Previously senior Coroner John Leckey had given the new PSNI chief a deadline of September 9 to provide the reports but he failed to meet this deadline. His predecessor, Hugh Orde, had similarly failed to meet deadlines.
“However, last week at Belfast Coroners Court an extension was granted by Coroner John Leckey until the end of February 2010 in which redacted copies of the report will be provided to court.
“The court was also told that apart from the actual Stalker/Sampson report there were 18 additional boxes containing materials and a number of lever-arch files known as appendices containing statements. The latter were said by lawyers acting for the PSNI chief to be ‘sensitive materials’ and that ‘applications for Public Interest Immunity concerning these would be made possibly from three separate sources.’ It is believed that this may relate to the PSNI, the MoD and MI5.

MI5
“MI5 had been involved in the operation that claimed the life of Michael Tighe and the wounding of Martin McAuley at a hayshed in North Armagh where MI5 had placed bugging devices that had recorded the shooting. This was at the heart of the investigation led by John Stalker prior to him being controversially removed being replaced by Colin Sampson.
“Currently in this case, as with all inquests in which the state was involved in taking life, including killings by loyalists in which collusion is a feature, MI5 are in charge of vetting, redacting and advising on what state evidence can and cannot be made available to the court. This in itself is seen as a major conflict of interest given their involvement in the killings.
“The court also heard that the British Attorney General has not as yet determined as to whether or not a Section 14 statement would be made concerning opening an inquest into the killings in October 1982 of three RUC members killed in an IRA landmine at Kinnego, County Armagh.
“At a previous preliminary inquest the Coroner, after reading a redacted version of the Stalker/Sampson Report, announced his intention to request the British Attorney General to reopen the case holding an inquest. At the time this led to media speculation that the three RUC men met their fate despite prior knowledge on the part of the RUC Special Branch and MI5 of the planned IRA operation in order to protect an agent within the North Armagh IRA.
“The court also heard that the Legal Services Commission has refused the families of those killed access to legal aid. To date they have relied on scant funding and largely the goodwill of their legal teams. With the inquests scheduled for 2010 and material to be made available soon ,this is something that should have already been in place. The court placed a note in the record concerning this”.
Meanwhile speaking after the hearing Tommy Carroll, the brother of Roddy Carroll, said in a statement issued through Relatives for Justice, that “it has been over 27 years since the murders and the families still await an inquest. We simply want the truth to be told.

GAGGING  ORDERS
“That the British Government and the PSNI are to now seek gagging orders signals their intentions to continue the practice of cover-up. This is nothing short of unacceptable.
“On one hand we are constantly told that we are in a new era of policing and political change which we acknowledge. However, in terms of these murders that is obviously not the case and the British government and the PSNI are clearly duplicitous.
“The continued practice of stalling, delay and withholding information concerning these murders routinely continues. Successive PSNI chiefs have prevaricated, delayed and continued with the old and failed agendas of the past in refusing information. This raises very serious questions about policing including their claims of a new beginning.
“The fact that those who planned and carried out the murders are to decide on the relevance of what is made available is absolutely ridiculous and makes a mockery of justice.
“We are calling on the Irish Government and our political representatives to address these shortcomings.
“It is equally no coincidence that currently we face these inquests with as yet no indication as to whether or not we will receive funding for legal aid whilst no expense is spared from the public purse in representing the PSNI, MI5 and the British Government. We were recently refused legal aid. At this morning’s hearing senior counsel appeared on behalf of the PSNI. Because of the failure to fund the families we are unable at this time to appoint senior counsel.
“The onus is on the British Government, the PSNI, and its intelligence agencies to come clean and provide the Stalker/Sampson Report in its entirety to the court and our legal teams. It’s time they allowed the truth to be told instead of concealing it.
This is a public interest matter and one that is essential to creating public confidence within wider society. The Coroner has continually referred to the importance of this case as part of the wider legacy cases.
“The British government and the PSNI are clearly out of step on this issue with public opinion. It time for truth.”

FAMILIES: Still waiting for an inquest. They simply want the truth to be told