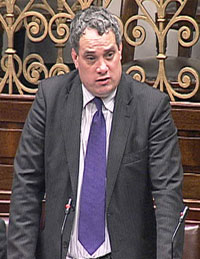 THE Irish Government should again look at suspending diplomatic relations with Israel after this week’s revelation that the Irish Minister for Foreign Affairs was refused permission to visit Gaza in occupied Palestine.
Sinn Féin’s Aengus Ó Snodaigh said it is high time that a hard line is taken on the issue. He declared Israel a “rogue, racist and belligerent state”.
Deputy Ó Snodaigh said:
“It was with regret but little surprise when I heard Mícheál Martin say that he was refused permission by Israel to visit Gaza. It was yet another slap in the face for the Irish Government from Israel that must not be allowed to go unchallenged. The minister should consider suspending diplomatic relations with Israel.
“Israel – a rogue, racist and belligerent state – has no right whatsoever to deny any Irish minister a visit to Palestine to see first-hand the humanitarian crisis that has been created by their criminal war actions.”

TAKE A STAND
The Sinn Féin TD said that no Irish minister “with a scintilla of backbone” can allow matters to rest here.
“I am calling on Minister Mícheál Martin to take a stand. It is high time that a hard line is taken on the issue of Israel – to stand out among European and world leaders and to stand up for the people of Palestine.
“He must demand access and make every effort to get to Gaza and Palestine despite what the Israeli authorities say. If the Israeli authorities refuse access again, diplomatic relations should immediately be broken off and the Israeli ambassador sent home.
“He has to make Israel understand that there are consequences for their actions. He must push for immediate action at European level. A start could be made by demanding an end to the special trade relationship that exists between the European Union and Israel.
“Meekly walking away from a major diplomatic insult without a response is tantamount to conniving and colluding in the abuse of the Palestinian people. It cannot and must not be allowed to happen.”
Meanwhile an aid convoy left Ireland from Dublin Port on Saturday 5 December to link up with the Viva Palestina convoy to Gaza leaving London the following day. The third Viva Palestina aid convoy, organised by MP George Galloway, will travel 4,000 miles to bring ambulances and vital humanitarian aid to the besieged Gaza Strip.
The convoy aims to arrive on 27 December, the one-year anniversary of the beginning of the brutal Israeli onslaught against the Gaza Strip that lasted for 22 days and left more than 1,400 Palestinians dead.
The Irish Palestine Solidarity Campaign said that in Tyrone, Galway, Dublin, Derry and Cork, “volunteers have been working flat-out, fund-raising and raising awareness of the plight of the people in Gaza”.
“Together, they will bring two ambulances, a minibus and a truck filled with over 10 tons of humanitarian aid,” the group said.
As a section of the convoy left Belfast to meet up with the other Irish volunteers, Sinn Féin MLA for west Belfast Jennifer McCann, who has recently returned from Jericho in the West Bank where she participated in a conference on the rights of Palestinian prisoners, congratulated the volunteers.
“The sheer size of this convoy and the fact that supplies have come from far and wide show the depth of feeling in relation to support for those in Gaza who are still reeling from the impact of the Israeli assault of December 2008 and January of this year,” McCann said.
“I wish those taking this vital aid to Gaza all the best and would appeal to Israeli officials who are still controlling access in and out of Gaza to allow this convoy to pass unhindered.
“Furthermore, there must be strident efforts to rebuild the peace process in the Middle East and part and parcel of that needs to include a huge international effort to begin the work of reconstruction in the Gaza Strip and the West Bank.”
Altogether, more than 100 vehicles left London on Sunday 6 December, and will travel through France, Italy, Greece, Turkey, Syria, Jordan, Egypt, and reach the Rafah border between Egypt and Gaza for 27 December.

SOLIDARITY FROM SCOTLAND
Cairde na hÉireann, the Irish republican solidarity group in Scotland, also wished the Viva Palestina aid convoy, to which they have given major assistance to over the past year, bon voyage, as two volunteers from Glasgow travelled to Belfast to link up with the Irish section of the convoy on Saturday.
A Cairde na hÉireann spokesperson said:
“Over the past months, a lot of our time has focused on fund-raising in order to buy a lorry and fill it with aid to take to the people in Gaza. Our driver, Paul Diplacito, has previously taken an ambulance on the first Viva Palestina convoy with sponsorship from Cairde na hÉireann.
“This time around we have filled the lorry with items such as wheelchairs, walking aids, medical essentials, educational supplies and shoeboxes of gifts for the children in Gaza from children in Scotland.
“We are very proud of the efforts of everybody who has supported this campaign and those who are driving to deliver this aid. While we are happy to see them set out before Christmas we must remember the dreadful conditions in Palestine that make these efforts so essential. We wish them, along with all the volunteers, a safe trip and will, of course, follow them every step of the way.”