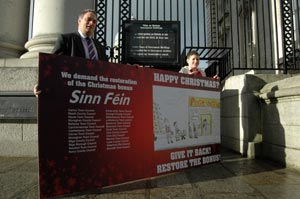 A FINAL appeal to the Fianna Fáil and Green Party Government this week to restore the Christmas social welfare payment was made by Sinn Féin Social and Family Affairs spokesperson Aengus Ó Snodaigh.
On Tuesday, the Dublin South Central TD accompanied 12-year-old Curtis Tysom to Government Buildings as the youngster presented a giant Christmas card appeal to the Government to restore the ‘bonus’ payment. The card was designed by Curtis and carries the names of those councils throughout the state that have passed motions calling for the restoration of the payment.
Aengus Ó Snodaigh said:
“Councils up and down the country are supporting the restoration of the Christmas bonus. It is clear that there is a groundswell of public support for the campaign.
“It is also clear that the Government has it within its gift to restore the payment as Sinn Féin has highlighted how funds can be found in our pre-Budget submission. All that is lacking now is the political will to have the payment restored.
“Without this payment many people are being forced into the hands of ruthless moneylenders in desperation to provide a decent Christmas for their children.
“There is a different, fairer approach which Sinn Féin has set out and I urge the Government, even at this late stage, to take that approach.”


NAVAN
Meanwhile, in Navan, local Sinn Féin Councillor Peadar Tóibín led a picket outside Fianna Fáil Minister Noel Dempsey’s office on Friday last to demand the restoration of the Christmas Bonus payment in this week’s Budget. At the picket, Councillor Tóibín delivered a copy of  Sinn Féin’s 2010 pre-Budget submission, ‘The Road to Recovery’ to the minister’s staff.
Councillor Tóibín said:
“Only an absence of political will is stopping the Government from restoring the bonus payment. Meath Sinn Féin has already demonstrated that Fianna Fáil’s cut will take millions out of a fragile Meath economy, hitting local jobs and retailers’ livelihoods. But this cut will also hit those who can least afford it this Christmas.
“Pensioners, people with disabilities, those who recently lost jobs, etc, are all having their pockets picked by this Fianna Fáil-led government. Thousands of people at the margins of Irish society are being leaned on by this government so that they can use the money to bail out the banks and property developers.
“We in Sinn Féin have detailed a clear alternative which aims to bridge the gaping debt chasm and stimulate the economy. Our solutions are about creating jobs. We have issued, both locally and nationally, a series of documents which detail practical ways in which jobs can be created and how the budget deficit can be resolved. Our proposals are comprehensive and they have been fully costed. They offer a chance to get both Meath and Ireland back on track. This is not the time for Minister Dempsey to play Scrooge to those most disadvantaged in our county. It is time for all of us to stand by those most in need.”