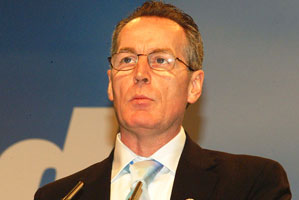 THE battle for economic equality in the Six Counties marks the 25th anniversary of the MacBride Principles for Fair Employment next Wednesday with a major civic reception in New York City Hall.
Sinn Féin junior Minister, Gerry Kelly MLA, will speak at the event, which is being hosted by the Speaker and President of New York City Council Christine Quinn.
Current and past Comptrollers from New York City and New York State will also be in attendance.  The offices of both Comptrollers have consistently used powerful American pension funds to back MacBride.  As well as strongly challenging patterns of structural inequality in the workplace, the Comptrollers are now supporting sustainable investments in areas of the North suffering decades of systematic discrimination.
MacBride signatory, Inez McCormack, will address the gathering alongside Irish Government representative Consul General Niall Burgess.
Speaking ahead of the event, Gerry Kelly told An Phoblacht:
“Its important that we recall twenty-five years of MacBride.  MacBride was central to ensuring the development of new laws and policies that promote equality of opportunity – particularly within the Good Friday Agreement. It reinforced the argument that the North’s inequalities are structural, not coincidental.
“But ten years of institutional resistance proves that legal tools and public policies are not enough, unless they are persistently implemented and monitored.  That’s the lesson of MacBride today,” Kelly said.
“Political power and financial muscle from America – filtered through tough contract compliance measures – can continue to play a hugely positive role in the North.
“Americans understand that investments which embed inequality in the North are not cost-neutral.  In fact, failure to positively promote equality carries huge long-term economic and social costs.
“And any investor who chooses to ignore the North’s structural inequalities is, by default, choosing to reinforce them.  Investment has to have at its core ending inequality – for people and for places in the North.”

POLITICAL GERRYMANDERING
Kelly recalled that forty years ago, political gerrymandering of electoral boundaries was a central focus of protest in the civil rights campaign.
“Today we still see the systematic gerrymandering of patterns of poverty and deprivation against successive generations within the same districts like north and west Belfast, and Derry.  Our priority today must be to challenge and change those deepening structural inequalities.
“These citizens have an unconditional right to equality – in jobs, in housing, and in life opportunities. Those were key civil rights demands.
“No-one can any longer be left behind by institutional resistance to equality. If the Peace Process is to mean anything it must deliver sustainable social change by integrating economic growth with tackling the deep-rooted inequalities and discrimination that still exist.  This is sensible, modern long-term economics.
“Next week’s event reminds us that external support, exemplified by the work of the Comptrollers’ offices and political goodwill in America, has previously assisted our campaigning for real change in employment discrimination.
“I want to acknowledge their continued positive agenda in standing for the objective of sustainable social change in the North today, in a way which makes hope real for areas – like my own constituency – still experiencing structural inequalities and systematic neglect,” Kelly said.