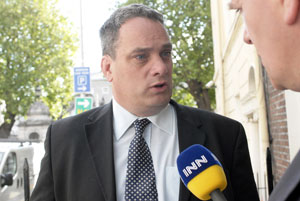 Ó Snodaigh calls for inquiry in every Diocese

PRESSURE is building against Catholic bishops named in The Report of the Commission of Investigation into the Catholic Archdiocese of Dublin, also known as the Murphy Report, with widespread dissatisfaction with their responses to date.
Archbishop of Dublin Diarmuid Martin said on Tuesday that he is writing to Bishop of Limerick Donal Murray and others to say that their responses are a matter for the people of the Dublin Archdiocese and not their own dioceses.
Martin said: ‘Everybody has to stand up and accept responsibility for what they did.’
A Dublin man who was sexually abused by a priest when he was an altar boy has said Bishop Murray should resign.
Mervyn Rundle was abused by Fr Tom Naughton in the mid 1980s. Rundle said Bishop Murray should have done more to protect children from abuse.
The report found that Bishop Murray reacted inexcusably to one known case of clerical child abuse while he handled a number of complaints and suspicions badly.
Speaking in the Dáil on Tuesday evening on The Report of the Commission of Investigation into the Catholic Archdiocese of Dublin Sinn Féin TD Aengus Ó Snodaigh called for an inquiry in every county in the state as he believes that child abuse by the Catholic Church was not confined to Dublin.
He said:
“The Report of the Commission of Investigation into the Catholic Archdiocese of Dublin exposes glaringly how the most powerful men in the Catholic Church in the Dublin diocese conspired to protect abusers of children. Especially damning is the conclusion that the state authorities facilitated the cover-up and allowed the Church to operate beyond the reach of normal law enforcement. Senior Gardaí, up to and including the level of Commissioner, repeatedly turned a blind eye to crimes of clerical sexual abuse.
“They colluded in crime in depraved sexual attacks, in an abuse of power and influence, they perverted the course of justice, they protected the guilty. They, the paedophile priests, the bishops, archbishops and Gardaí who protected them, I believe and many others believe are culpable in the deaths by suicide of many, many abused children or later adults whose lives were destroyed by the paedophiles and their protectors. Remember we are talking about children.

GROSS BETRAYAL OF CHILDREN
“I am calling for an inquiry into each and every county, because I believe that child sexual abuse on the systematic scale we have read in the harrowing report from Judge Yvonne Murphy was not just confined to the Dublin diocese or to the Ferns Diocese as in the case of the Ferns Report, that it was widespread and was visited on children in every diocese. I believe that society owes it to those it failed to protest in the past, to expose the wrong done to those children and ensure that every step is taken to pursue the perpetrators and those who failed or purposely refused to carry out their duties to protect children and to investigate and prosecute criminals.
“It represents a gross betrayal of generations of children by powerful people in clerical and state authorities.”
Meanwhile speaking during a break at the Sinn Féin Ard Chomhairle meeting in Dublin last Saturday, Party Vice-President Mary Lou McDonald said anyone found to have covered up the abuse of children should be arrested and face the full rigours of the law.
McDonald described the state’s child protection services as a disgrace and said sadly the abuse of children continues today.
McDonald said:
“The report on clerical sexual abuse of children in Dublin exposes how the most powerful men in the Catholic Church in the Dublin Diocese conspired to protect abusers of children. It was a gross betrayal of generations of children.
“It is especially damning that the State authorities facilitated the cover-up and allowed the Church to be beyond the reach of the law. Senior Gardaí, up to and including the level of Commissioner, repeatedly turned a blind eye to crimes of clerical sexual abuse.
“Anyone, including Gardaí, found to be complicit in the cover up of child abuse must be arrested and made to face the full rigours of the law.
“The Government must take immediate action in response to the Report’s finding that the legislation governing the role of the HSE in dealing with child sexual abuse is inadequate.
“Like the Ryan Report, this report must prompt the Government to act urgently to protect vulnerable children today. Another recent report led to the closure of the facility at Ballydowd. It exposes serious deficits in standards aimed at safeguarding vulnerable children.
“Sadly child abuse is not a thing of the past and is continuing today and, to the shame of successive Governments in this state our child protection services are a disgrace. The HSE knows of cases where children are in grave danger but the services are not in place to make the interventions required.
“If the State does not put in place the services for the protection of children then it will be just as culpable as it was in the past when it facilitated the cover up of child sex abuse.”