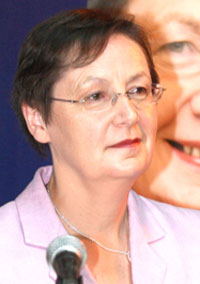 SINN FÉIN MEP Bairbre de Brún has said that the EU must seek a legally binding deal at the UN Climate Change summit in Copenhagen.
Speaking on Wednesday, 25 November de Brún said:
“The European Parliament clearly stated today that EU negotiators must seek a legally binding deal in Copenhagen.
“The European Parliament vote confirms that the EU must commit to at least €30 billion per year in climate funding to developing countries by 2020 in addition to overseas development aid. Moreover proactive adaptation actions in the most vulnerable regions should have priority.
“These are matters I wish to stress when in Copenhagen as part of the official European Parliament delegation to the UN climate summit.
“We also asked the EU to clarify under what conditions it will strengthen its emissions targets to 40% by 2020 in keeping with the latest science.
“Unfortunately, the resolution acknowledges that nuclear energy will be part of the energy mix in the medium term.  We cannot allow the nuclear lobby to be the winners in Copenhagen.
“The resolution also remains at the 80% emissions reduction level by 2050 compared to 1990 levels.  This underlines the need for a Copenhagen deal that allows targets to be strengthened to keep pace with the latest science.
“We must develop new cleaner technologies and ensure climate justice so that developing countries are really supported in their mitigation and adaptation policies.”
Bairbre de Brún will be in Copenhagen from 13-19 December 2009 as part of the official European Parliament delegation to the UN climate summit
An Phoblacht
44 Parnell Sq.
Dublin 1
Ireland