Who fears to speak of a united Ireland? 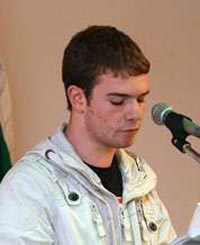 “THIS generation needs to be a generation of ‘impatient republicans’,” that’s the message Senator Pearse Doherty sent to Ógra Shinn Féín at its National Congress a number of weeks back in Belfast as we launched our new national campaign, ‘Who fears to speak of a united Ireland?’
He’s right, of course, and as impatient republicans the reunification of our country is an urgent priority and vital objective. That’s why we are launching this campaign to encourage our generation to get involved in the struggle to smash partition.
In the North, with all the benefits of peace, comes a semblance of normality. And while the majority of the nationalist community is behind our project, the danger of apathy setting in is difficult to avoid. Young people in particular, many of whom have little to no memory of conflict, are particularly susceptible.
The urgency of what we intend to achieve must be communicated in simple and clear terms, and indeed we have to listen to their perspective on what partition means to them. For a lot of young people, it’s things like two mobile phone networks, two sets of currency, language rights, the British Army presence, public services being duplicated and two mediocre soccer teams instead of one half-decent one.
It’s the small practical details as much as it is the bigger picture. That’s not to neglect the bigger picture, of course, and we will continue to promote national consciousness and develop a unitary Irish identity that we can all – nationalist, unionist and other – be proud of. We need to communicate that, to paraphrase Margaret Thatcher, ‘Ballymena is as Irish as Ballymun.’
Nor can the South be taken for granted.
A combination of a partitionist media, hostile to republicanism, an Establishment comfortable with the status quo, and an underlying mentality that the national question is settled means that support for reunification isn’t what it should or could be. It isn’t exactly on top of the agenda for most people.
Having said that, most people in the South, if pushed, will state their support for a united Ireland. But have they, or are they ever, likely to do anything to further the cause of unity? In most cases, no. And indeed many of these people may not vote for a united Ireland if push comes to shove. I’m sure you can imagine the media spin – it’ll destabilise the country, we can’t afford it, etc, etc. So it’s abundantly clear we need to get the national question back on the agenda and being debated.
That isn’t going to be done by lecturing and hectoring people for not being active, or by endlessly ruminating on the past. We need to make it relevant to people in the South: why it makes sense financially and socially, and to sell it as something current and attractive.
We need to make it clear that a united Ireland would not be a ‘26-County state deluxe’ but something new, a clean break. After all, this isn’t about lines on maps: it’s about making the quality of life better for all Irish people.
We intend to use this campaign to explore ways of developing support amongst the public in the South, and in particular young people, for a united Ireland.
But it’s not just the wider nationalist community who have to be engaged with. At that Belfast congress, Stephen Agnew of the Green Party said that if we really want a united Ireland it’s up to us to persuade the likes of him, open-minded people who have no ideological attachment to either unionism, or republicanism; to persuade people like him that we can afford a united ireland, and that the quality of public services wouldn’t deteriorate in a united Ireland. And more than that, to persuade them that a united Ireland is economically and democratically the most viable option open to the people of the Six Counties.
Agnew is entirely right. These are the issues that we must engage with and the arguments we must win. There are nominal unionists, sensible people who will vote for a united Ireland if we can assure them that their interests and identity will not be hindered and that stability will not disappear. We intend to engage with these people to find out exactly what concerns they have about a united Ireland and how best to overcome them.
So this campaign will be taking on our traditional objective, quite simply ‘The reconquest of Ireland by the people of Ireland’, in an innovative and imaginative way, widening the debate and mobilising Irish youth. There will be videos, talks, debates, publications, protests and murals, along with some more unconventional methods. How well will it work? As impatient republicans, our success will be measured simply by how long we have to wait.

• The Ógra campaign for a united Ireland can be followed at www.ograshinnfein.blogspot.com.

Chris Conwell – Fermanagh
I WANT a united Ireland because partition is illegal and immoral. The British have no right in Ireland. People like me who live in border areas suffer because of the border due to very bad roads, poor public transport and also the great financial burden on young people. Two mobile phone tariffs operating on one small island – it just makes no sense.

Mairéad Farrell – Galway
A UNITED Ireland is not solely a necessity for nationalistic reasons but it is also important for the running of this country.
We are in the middle of a recession, where Government policies and socialist alternatives are vital in order to create jobs. The fact that two parts of this country use two different currencies and have separate institutions controlling their finances can only hamper any real attempts to stop this recession.
The occupation of this country is as important today as it was 800 years ago.