'All we want is justice and truth' 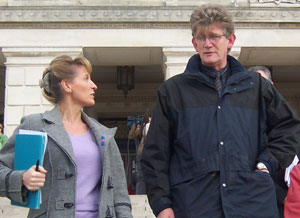 TODAY, Jon McCourt is a well-known figure in his native Derry, he has spent many years working in the community sector and is frequently seen extolling the virtues of the city to groups of visitors.
It was a very different story in 1955 when he was sent to the Termonbacca Boys’ Home at the age of just two-and-half.
Run by the Sisters of Nazereth, it was to become his home for the next decade.
“My father had been badly injured in a road accident and my mother was pregnant with my younger sister at the time. She ended up in one hospital and my father ended up in a hospital in England – that’s how it happened,” he says.
Jon and his two brothers were dispatched to Termonbacca, on the slopes of the Creggan, while his sister eventually ended up in the Nazareth House in Fahan, County Donegal, and was later transferred to their home in Bishop Street in Derry.

"In Termonbacca I became a number. I wasn’t Jon McCourt. I wasn’t a human being"

Nestled on a green hillside overlooking the arc of the River Foyle, Termonbacca is in an idyllic location. But the beauty of its surroundings masked the true horror of the abuse that occurred behind its walls.
“In Termonbacca I became a number. I wasn’t Jon McCourt. I wasn’t a human being. I was just a number. Everyone was given a number when they arrived in that place.
“It sounds hard to believe but it was years before I knew that my brothers were in the home as well. They kept us in separate parts of the institution and we never actually met. It was all about control.
“There was some horrific physical abuse that went on in there. Once I had my skull bashed in by a nun with a wooden towel-holder. That was the kind of thing that happened and sexual abuse by some of the older boys who were put in charge at times was also commonplace. You had all these boys in a dorm with just one nun supposedly supervising them. The nun was in a small room in the corner from where she couldn’t possibly see what was going on.”
When the Ryan Report was published in May, it sent a shockwave through Irish society. It was, of course, already well-known that abuse was widespread in state institutions but Ryan laid bare the true horrifying extent of it.
However, despite the fact that many of the institutions were run by all-Ireland orders, Ryan did not report on those in the Six Counties.

"It was years before I knew that my brothers were in the home as well. They kept us in separate parts of the institution"

So while Ryan opened many wounds for those in the North, it didn’t offer any acknowledgment or redress. And that is an injustice which Jon and others are determined to put right.
“This is not about money or compensation; it’s about acknowledgement and justice,” he says.
“And it is about the guys who I believe died as a result of the abuse they suffered.
“There were six fellas who were in Termonbacca at the same time as me who have since died in circumstances that were directly linked to their psychological condition stemming from the abuse.
“They were thrown into a system that was supposed to care for them but in reality it was a system that had been corrupted. It abused and utterly failed the children left in its care and people have to take responsibility for that.
“I’m very encouraged by what has emerged from the Ryan Report and the acknowledgement and apology from Australian Prime Minister Kevin Rudd to those who were abused in state institutions there after being forced to migrate to Australia.”
John is keen to pay tribute to those within the institutions who he insists were a power of good.
He said:
“It would be wrong to tar everyone with the same brush because there were some wonderful people in Termonbacca over the years and I want to acknowledge that.
“And no one should see any of this as a challenge to their faith. It was the institutions that failed, not our faith. In fact, I would like to see people re-engaging with the church and as we get on with rebuilding our lives I think this process can help to do that.
“It is almost like a ritual cleansing. The cover-ups, the lies and the deceit have to end and when we get truth it won’t only help us, it will help our families, our communities, the church and society as a whole.”
Jon is also encouraged by the recent Assembly vote in favour of a motion calling on the Executive to examine the extent of abuse in children’s homes in the North. It was an emotional day for the delegation to the Assembly, as Jon acknowledges.

"This is not about money or compensation; it’s about acknowledgement and justice"

“There were people there that day who had been in Termonbacca at the same time as me who I hadn’t seen since I left, men who I remembered as boys with numbers and we all remembered the numbers. There were also women who had spent years in the girls’ homes as well. It was incredible.
“The big thing is what happens next and how the Assembly now moves this process forward.
“I believe that the establishment of the  assessment process agreed at the Assembly should move forward quickly and should include an in-depth consultation with survivors of these institutions.
“These places have impacted on us in many ways and there is an immediate and a future need to deal with the consequences of what went on there before it further destroys more lives.
“But we’ve made a lot of progress and I’m very grateful to Sinn Féin and particularly Martina Anderson. The support I have received has been unbelievable and I would encourage anyone who is living with these kind of difficulties to approach their political representatives because they can put them in touch with people who can help. There are organisations out there like Faoiseamh who can provide counselling and support. I have set up an e-mail address ([email protected]) and I am asking former ‘homeboys’ to contact me in confidence. We’re also in the process of setting up a website and if just one person comes forward as a result of this and looks for help then it will be worth it.”