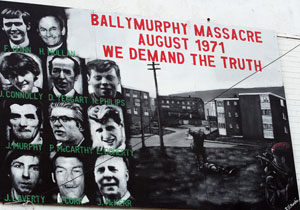 CAMPAIGNERS for the truth behind the 1971 Ballymurphy Massacre received a huge boost from Europe’s leading human rights parliamentarians in Brussels on Wednesday 18 November after they secured the support of MEPs from across the political spectrum in a lobby of parliament hosted by Sinn Féin MEP Bairbre de Brún.
Between 9 and 11 August 1971, at the beginning of internment, 11 innocent civilians were shot dead by the British Army in the greater Ballymurphy area.
The killings left 47 children without a parent. However, there was no proper criminal investigation.
It was revealed last year that two of the paratroopers who killed six people on Bloody Sunday are understood to have killed up to four people in the Ballymurphy massacre just five months earlier.
During last week’s visit by campaigners to the European Parliament, MEP Claude Moraes, deputy leader of the Socialist and Democrat Group and spokesperson for Civil Liberties, Justice and Home Affairs, said he wants to issue a written declaration of support for the families as soon as possible.
On top of this, he wants to ask every other MEP in the European Parliament to sign the declaration and ultimately get full EU backing for the families.
The British Labour Party MEP, whose Catholic grandfather was imprisoned by British rulers in India, said he had no problems throwing his weight, and that of his 182-member strong grouping, behind the campaign.
“My grandfather was imprisoned by the British. The British have brutalised people all over the world. As a child I never quite understood why he was tortured. His crime was he was from south India, he was a Catholic, and his crime was to be part of a movement to get the British out of India. He was released a broken man.”

MAJOR DEVELOPMENT
Liam Quinn, whose brother Frank was shot dead in the atrocity, said the trip was a major development for the families.
“Being here in the flesh is beneficial. You get a sense of where MEPs are and how much they support you, face-to-face. There’s not a lot they can do on their own; they need to get a lot of support in order to make any headway and hopefully that’s going to happen now.”
On Wednesday, relatives of the men and women killed met with MEPs from Ireland, Portugal, Britain and Spain to call for an international investigation, a statement of innocence about the victims – who were initially branded gunmen and gunwomen – and a public apology from the British Government.
Every single MEP agreed to do whatever they could to spread the families’ message and to try and lobby support from their own national governments.
Alice Harper, whose father Daniel Teggart was shot 14 times, said the trip to Brussels was extremely important in their campaign.
“I’m very happy about it, no matter even if it’s one person who gives us their support it’s someone else listening to our story, it’s someone else who knew nothing about it, it will go a long way we hope.”

IMPORTANT ARENA
Sinn Féin MEP Bairbre de Brún said coming to Brussels and the heart of the European Parliament was an important step forward in promoting awareness of the tragedy.
“This is an important arena and it’s good you’re here”, she told the West Belfast delegation.
“This visit is about putting the Ballymurphy Massacre on the political agenda on this level and it’s a way of bringing pressure and a way of making a wider group of people who have been supportive of the Peace Process aware of the fact that more moves need to happen.
“It’s about people becoming engaged and reflecting that back to people in Britain and Ireland.”
The Sinn Féin MEP said that the make-up of the political scene internationally and the make-up of the British Government in Britain will make a difference.
“It is important to raise the questions with the government that is here today and also to raise it with the Dublin Government in order to add to your voice.”
Portuguese MEP Rui Tavares, a former investigative journalist, pledged his support, adding:
“The truth costs nothing.”

• BRUSSELS – AN IMPORTANT ARENA: Sinn Féin MEP Bairbre de Brún with relatives of the men and women killed in the 1971 Ballymurphy Massacre