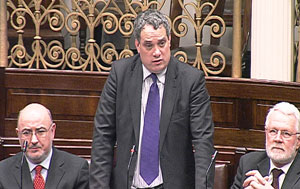 GOOD FRIDAY AGREEMENT
He explained that Sinn Féin’s approach to strengthening equality and human rights in Ireland, and in the 26-County state in particular, is primarily guided by the treaty obligations imposed on the Irish Government by the Good Friday Agreement.
“Three of these have particular relevance to this jurisdiction. First, the equivalence obligations that Colm Ó Cinnéide has analysed so persuasively in his 2005 opinion commissioned by the Equality Authority. Second, the provision to conclude an All-Ireland Charter of Rights. And third, the related commitment to a Bill of Rights for the North – which holds the potential to create a model superior to the 1937 Constitutional provisions, and in doing so exert upwards harmonisation pressure on the 1937 Constitution in the context of the equivalence obligations and the All-Ireland Charter.”

OPPORTUNITY
Sinn Féin is not content to stop at the Good Friday Agreement provisions, the republican TD emphasised.
“We also have a long track record of commitment to equality and human rights-proofing of all law and policy, including budgets, to the extension of grounds on which discrimination is prohibited by law, and to ensuring that Ireland keeps pace with the evolving international human rights treaty architecture.
Commending the Equality and Rights Alliance’s approach to a host of issues, Aengus Ó Snodaigh concluded:
“In crisis there is opportunity. We need to stop fighting rearguard actions in defence of what was already achieved and instead go on the offensive to realise maximum outcomes for equality and human rights for all people living in Ireland. Sinn Féin stands ready to join with you in doing so.”