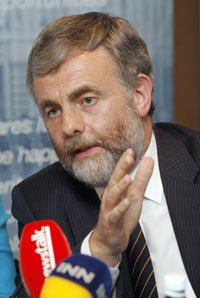 THE priorities for Ireland’s biggest trade union in any talks on a new social partnership deal with the Fianna Fáil/Green Party Government were outlined by SIPTU General President Jack O’Connor at the Annual Countess Markievicz Memorial Lecture in Liberty Hall in Dublin on Monday evening.
The SIPTU leader said that only through agreement between the Government, unions and employers is a viable and sustainable economic recovery possible and that it must have a strong social dividend to be acceptable to workers.
“In one respect,” Jack O’Connor said, “we do agree with our opponents on the Right who articulate the interests of the 5% who own 40% of national wealth – confidence is the key. But that will not be achieved in a country with our history and traditions by demonising people or heavy-handed tactics. That approach will meet with stiff resistance, whether it is organised by the trade union movement or otherwise. Any assessment of the balance of forces would anticipate victory for the orthodox view. However, when all is done, there mightn’t be that much left to win.
“The only viable way forward is through agreement. All sides must make accommodation to achieve it. All sides must recognise that there is no pain-free or risk-free way ahead. All sides must embrace the requirement to make a contribution but it must be on the basis of ability to do so.”
Trade unionists accept the need to grapple with difficult issues. That said, there can be no basis for agreement except in the context of a measurable additional contribution from high net worth individuals and those on incomes of €100,000-plus per annum through taxation of one form or other - at least in the short to medium term.
“On our side we know we have not been able to shift the focus from stabilising the deficit.  However, it is time those on the other side acknowledged the danger of the gamble and at least provided for an each-way bet.”
He explained that this would entail off-balance sheet investment, subject to clear commercial criteria such as adoption of the ideas put forward by the Construction Industry Council and by others, including Sinn Féin and the Opposition parties.
“In this regard, the policy of ignoring the National Recovery Bond idea on the basis that it might attract funds which could otherwise serve to shore up the banks is no longer justified in the light of NAMA.
“We know that the crisis in the public finances is such that it cannot be completely rectified by resumption of economic growth or taxation for that matter.
“We have acknowledged the necessity of doing more with less. However, this is entirely different from the crude dismantling of the public and social infrastructure practiced in the late 1980s and early 1990s.
“The approach must be enlightened and fair and it must preclude compulsory redundancies and it must offer reassurance and opportunity to people as well.”
The workers’ representative insisted that we must all strive to find alternatives to cutting social welfare rates, “penalising the most vulnerable in our community”, adding:
“This should be an absolute kernel of policy for all sides and the capacity to do so should serve as the litmus test of us all.”
Any agreement must embrace the €1 billion jobs and training fund proposed by Congress, Jack O’Connor said. It must address the plight of people who are threatened with repossession of their houses and loss of their pensions in the private sector.
And he dealt with the issue of pay.
“On the question of pay, we recognise the implications of currency appreciation. We must find a way of adjusting for it incrementally but not through the ‘quick-fix’ approach which threatens more harm than good.
“Ultimately, any agreement must scope out a ‘social dividend’ for workers not just a return to ‘business as usual’ for those at the top.”
Jack O’Connor contended that a good place to start would be by abandoning the outlook that caused the fiscal problem in the first place.
“It is becoming fashionable to dismiss the concept of ‘fairness’ from the recovery equation on the basis of the argument that things are so bad it is a luxury we cannot afford. Nothing could be further from the truth!
“Fairness is central to the success of some of the most successful economies in Europe. It is the catalyst for economic and social progress.
“There is no such entity as Ireland Inc. Ireland is a society not a business or even a corporation. ‘Ryanair-isation’ does not offer a sustainable solution to our problems and the sooner all recognise that the better.”