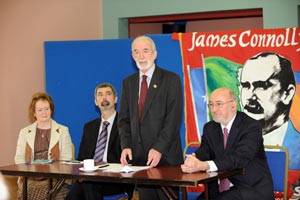 The struggle now before us

A CAPACITY attendance at this year’s Volunteer Feargal O’Hanlon Memorial Lecture in the Teach na nDaoine Family Resource Centre in Monaghan Town heard the head of the Legal Rights Unit of SIPTU, Michael Halpenny, call for underpinning legislation for collective bargaining.
He also called for large turn-outs at all mobilisations called for by the Irish Congress of Trade Unions to oppose cuts in public services and attacks on living standards and to demand action on job creation.
His address covered the story of the Irish Transport & General Workers’ Union from the early years under Jim Larkin, James Connolly and William O’Brien, through the ‘glory years’ of the middle decades and right up to the present day and all the difficulties now facing workers and their families.
Without a break, without an interruption, this hour-plus enthusiastic presentation held the audience’s absolute attention.
The event was chaired by the Cathaoirleach of Monaghan Town Council, Cllr Seán Conlon. A vote of thanks was proposed by Cllr Pádraigín Uí Mhurchadha, sister of Feargal O’Hanlon, and seconded by Sinn Féin Dáil Leader and Cavan Monaghan TD Caoimhghín Ó Caoláin.
Michael Halpenny said it was a great honour to be invited to deliver this memorial lecture in memory of Feargal O’Hanlon on the 52nd anniversary of his sacrifice and said:

FAIRER WAY: The ICTU 10-point plan shows that all sectors of our society could be mobilised to tackle the immense economic and social problems which challenge us