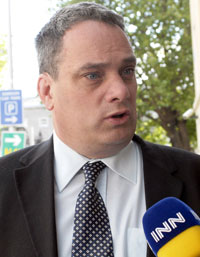 SINN FÉIN this week launched a campaign to force the Government to restore the Christmas social welfare payment.
Up until this year, long-term social welfare recipients received a double payment in early December to cover the rising cost of Christmas. It was announced in April’s Emergency Budget that the payment would not be made this year.
The axing of the Christmas social welfare payment will cause great hardship and force families dependent on social welfare into the hands of ruthless money-lenders in the run-up to Christmas.
It will result in elderly people who use this additional payment to help cover the costs of fuel over the winter period going without sufficient heating this year.
Despite the severe economic difficulties faced during the 1980s, the revenue was always found to cover this payment.
So why has the Government been able to get away with axing this crucial payment to the most vulnerable and least-well-off?  They have been able to get away with it because many of those affected are not even aware that the payment has been cut.
This cut has received little media attention and the people affected do not have the ear of Government ministers to make their case.
That’s the starting point of Sinn Féin’s campaign – informing those who are going to be affected that there will be no Christmas payment this year.  The party will be distributing over 160,000 leaflets at dole queues and post offices in the coming weeks.
Sinn Féin will be organising a range of events and initiatives across the state over the coming weeks to publicise the campaign’s demands and put the Government under pressure to restore the payment. The party will be seeking to work with other individuals and organisations who share our demand that the payment be restored.
Sinn Féin will be encouraging those affected to make their voices heard locally and nationally and to make it known to their local Fianna Fáil TDs in particular how this cut will affect them.
Speaking to An Phoblacht as Sinn Féin launched its campaign, the party’s spokesperson on Social and Family Affairs, Aengus Ó Snodaigh TD, said: “The people who I’ve been talking don’t have savings to cope with this kind of unexpected reduction in their income. The reality is many of these people will find themselves forced into the arms of ruthless money – lenders  – legal and illegal  – who will charge them exorbitant interest rates.” The Sinn Féin TD went on to say:
“The Scrooge-like nature of the cut symbolises the extent to which this government is willing to throw the least-well-off overboard while protecting a wealthy elite of bankers, developers and senior civil servants.
“The €200 million saved by axing this payment can be found elsewhere including through increasing taxes on the wealthy – and Sinn Féin’s pre-Budget submission demonstrates this.”
The Government has clearly decided, according to Ó Snodaigh, that the unemployed and other social welfare recipients are an easy target. He argues that if they get away with axing the Christmas bonus they would press ahead with further devastating cuts to the dole and other social welfare entitlements.
Ó Snodaigh said Sinn Féin’s campaign to reverse the axing of the Christmas social welfare payment will help mobilise those affected and build an effective public opposition to the welfare cutting agenda.
“Cutting welfare payments is the worst thing you can do in a time of recession – it pushes more people into poverty and has a depressive effect on the economy prolonging the recession.
“This Government agenda and its political cover from the likes of Colm McCarthy need to be resisted.
“Sinn Féin will stand up for ordinary people in resisting it.  The campaign to reinstate the Christmas social welfare payment is part of that resistance.”