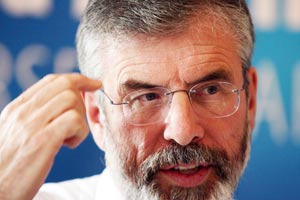 SINN FÉIN President Gerry Adams has called for a major mobilisation of public support for ICTU-organised rallies this Friday in support of a fairer way to deal with the economic crisis.
Gerry Adams said:
“Sinn Féin is encouraging party members and supporters and the public to come out in solidarity with fellow trade unionists, workers in the public, private and community sector and the general public.
“Ordinary citizens should unite in opposition to Government plans to target the least well off to pay for the recession while €54 billion of public money is being used to bail out bankers and developers through NAMA.
“All workers should be wary not to fall into the carefully fostered notion that the public and private sectors are in competition with each other. This Government is preparing to target workers across the board regardless of what sector they work in and we need to unite in opposition this.

PRE-BUDGET SUBMISSION
“Sinn Féin agrees with ICTU’s demand for a better, fairer way and is putting forward a pre-budget submission in the coming weeks that argues just that. The submission will show how the revenue required can be raised without targeting the least well off or cutting public services.
“In our document Getting Ireland back to work Sinn Féin put forward over 80 proposals for retaining and creating jobs. Yet despite constructive proposals from Sinn Féin and the trade union movement, and as the number of unemployed continues to soar, the Government continues to do almost nothing to stop jobs being lost and create alternative employment.
“People who have lost their jobs or had working hours reduced, some of whom face the repossession of their homes, are rightly angry at the amount of public money being poured into NAMA.
“It is time that all those opposed to the Government’s flawed approach of cutting services and social protections got together, stood up and made their opposition known.”

NORTH
In the North the focus of ICTU demonstrations will very much be on planned cuts to the health service, including job losses and the closure of hospital beds. The British Treasury is demanding ‘efficiency savings’ of £700 million over the next three years.
“The reality is that it will be the most disadvantaged, whose life expectancy is already significantly lower than others, who will be most adversely affected by these cuts.”
Adams said that the Executive in the North is facing very real challenges in meeting the efficiency targets demanded by the British Treasury.”
“I believe that there are steps we can and must take to defend public services, and already Sinn Féin Ministers in the Executive have taken steps to ensure that key public services such as water and public transport remain under public control”, he added.
Sinn Féin has led the demand for greater all-Ireland  co-operation across the Health Service and Adams said he believed this could deliver substantial savings that could be channelled into sustaining and developing front-line services.
The rallies in the 26 Counties are being held in Dublin, Cork, Galway, Limerick, Waterford, Sligo, Tullamore, and Dundalk while in the Six Counties they are being held in Belfast, Derry, Newry, Armagh, Ballymena and Magherafelt.
An Phoblacht
44 Parnell Sq.
Dublin 1
Ireland