Golden circle free for all continues 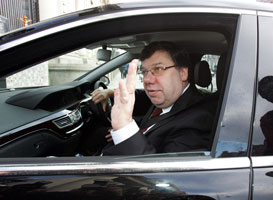 THE country is gearing up for one of the harshest and crippling Budgets that we have seen in a long time. This summer has produced the ‘Bord Snip Report’, the Commission on Taxation Report and the NAMA legislation has been before the Dáil. All in all, Government strategy looks likely to try and cut and tax its way out of economic recession. But where is the planning, the initiatives to get Ireland back to work, to stop the haemorrhaging of jobs and indigenous enterprises from rural areas, to promote rural regeneration and to revitalise the indigenous agri-food sector?
At the start of the summer, the Oireachtas Committee on Enterprise, Trade and Employment commissioned a report entitled What is required to expand employment in the agri-food sector? and Arthur Morgan has conducted meetings with groups including the IFA, Teagasc, IASC and small agricultural producers as well as conducting an industry survey. It is this consultation with industry
and ‘bottom-up’ interaction that is needed to stimulate the economy, business and create employment; not NAMA.
It is important to recognise the importance and value of the agri-food sector to the Irish economy. Not only does it support local agricultural communities to develop an environment that is supportive of enterprise development but in 2008, the agri-food sector accounted for 10% of the total merchandise exports in Ireland at nearly €8.6 billion in product.
It is time for practical solutions to the crippling unemployment that faces this country. It is time Ireland embraced the natural resources bestowed upon us to realise our competitive advantages internationally.